Sometimes you are first recommended by those you trust to read an author, meet an individual or try something that you have yet to dabble in as something/someone they think you might like, but it takes you time to explore said suggestion. In fact, it may be years, but the suggestions always sits in the back of your mind as there is something about it that tickled your curiosity. Such was the case with British cookbook author and food columnist Elizabeth David (1913-1992).

Even Julia Child spoke highly of David’s writing, and while they shared commonalities in their background coming from upper-middle class families, having a strong penchant for French food, and being female cooks in the middle of the 20th century, their personalities and demeanor were quite different.

However, while I am quite fond of Julia Child and will always hold her in high regard, I equally appreciate the sensibility of Elizabeth David’s understanding, respect and astute observation of the French’s approach to food, and it is evidenced in the first two cookbooks I share below and have read and annotated profusely.

An advocate for quality ingredients; a simple approach to cooking, but no more; and cooking with seasonal and regional produce to ensure top potential in flavor, I found myself relaxing with each page I read as she spoke a language I knew well.

Also, it is her recipes that I am grateful to have found as they are not traditional and they are not precise – that is to say, they are not a bulleted checklist. Thank you Elizabeth! In other words, she asks of us each to simply spend time in the kitchen, play with the ingredients or similar seasonal and regional ingredients we have at our disposal, and dance with the food in our own way.

“So long as I have a supply of elementary fresh things like eggs, onions, parsley, lemons, oranges and bread and tomatoes — and I keep tinned tomateos too — I find that my store cupboard will kalways provide the main part of an improvised meal.” —Elizabeth David for The Spectator on December 9, 1960

Below I have shared my takeaways with the three books you see in the image above. I am also looking forward to reading her authorized biography (seen right) which is en route to my home as I type and will be, I have no doubt, wonderful summer reading.

What I enjoyed and appreciated most about Elizabeth David’s second bookbook, (A Book of Mediterrean Food (1950) was her first and while a dream and a treasure, it was in fact just that, a dream of scrumptious food that the British had no access to as they were just emerging from the war and the country was under heavy rations), is the simple everyday approach and suggestions to food in our everyday lives. It is David’s talent for description of the food in all of her books, including French Country Cooking, that she shares rather than enumerates an approach to a recipe. Nowhere in French Country Cooking will you see a traditional formatted recipe, but rather short or long paragraphs sharing how to approach a particular dish. With casual expertise, her confidence is laid bare, and the reader too wants to indulge in the simple, yet clearly scrumptious seasonal meals that are suggested.

In French Country Cooking, David provides a kitchen tool list which is worth examining, and what you will find, with relief, is that it is not extensive, but rather practical. In fact, many of the tools we do eventually welcome into our kitchen will be signature to our approach to cooking. David recommends while “you have the basic necessities to begin with” and then “buy gradually as you find out which style of cooking best suits yoru talents”.

However, when it comes to one essential we all should have in our kitchens, and I have to concur, as not having these tools frustrated me and discouraged me from believing I too could make the meals I dreamed of for quite some time, she recommends immediately, “First, and these are essential to any kitchen, come the very best quality of cook’s knives.” But you need only a few:

“Devote all the time and resources at your displosal to the building up of a fine kitchen. It will be, as it should be, the most comforting and comfortable room in the house.”

“A highly developed shopping sense is important, so is some knowledge of the construction of a menu with a view to the food in season, the manner of cooking, the texture and colour of the dishes to be served in relation to each other.”

Critics describe David’s first five cookbooks as her most revered and worth reading, and so I picked up two of them, French Country Cooking, as shared above, and (this will not surprise my fellow Francophiles) French Provincial Cooking which was released in 1960 and arguably for what she is most known.

David was an extensive traveler, and while France was not the only country she would spend time, she would visit north Africa, Italy, Greece and many other European countries, it is her cookbooks focused on French cuisine which food writers and foodies most give her applause.

In French Provincial Cooking, she shares generously anecdotal memories and moments about each province of France, as well as quintessential food items that originate from each region. In so doing, she directly reminds, but indirectly hints throughout, the importance of cooking with local and seasonal produce to ensure the best flavor, and thus enabling the cooking to be simple and less convoluted.

“The feeling of our time is for simpler food, simply presented; not that this is necessarily easier to achieve than haute cuisine; it demands less time and expense, but if anything a more genuine feeling for cookery and a truer taste . . . good cooking [is] achieved when ‘ingredients tast of what they are'”.

“There is a seasonal aspect of French cookery; to many tourists French food is know only through summer holidays, and many of the great specialties of regional cooking are then out of season.”

“So much of one’s enjoyment of a meal depends upon having the right food at the right moment.”

“There is one mistake we nearly all make when first attempting French cookery. We make it too complicated . . . two of the most valuable words [Escoffier] ever wrote were Faites Simple“.

With each section dedicated to a different province in France, David sprinkles mentions of recipes. And it is with her delectable prose that she will have you searching madly in the index to find where in the book the recipe is shared.

French Provincial Cooking is a tome. The first section, a history of each region, a brief middle section dedicated to intructional chapters regarding kitchen tools, herbs, techniques, etc., and the third are the recipes.

The third book seen above is one of her later compilations of food columns she wrote over the decades since 1954 which appeared in The Spectator, Gourmet, Vogue and The Sunday Times. I have just begun to read this book, but as someone who enjoys biographies and autobiographies, seeing the journey of a writer, and how she describes food, and how her approach and opinion evolves, fascinates me. Each column is no more than a couple of pages, which is perfect for reading one or two a night. Who wouldn’t want to go to bed with visions of good food dancing about in their mind before drifting off to sleep?

Needless to say, if what I have discovered in the first three books I have read/am reading by Elizabeth David are any indication, more of her 11 cookbooks will be enjoyed in the coming months and years.

With The Simply Luxurious Life being a destination for both Francophiles and now most certainly Anglophiles as well, Elizabeth David fits the blending of the two worlds in a most perfect way.

~Do you enjoy reading TSLL blog and visit regularly, but would prefer to read the blog without ads? I have some good news for you. For a limited time, during British Week, the price for a monthly or yearly ad-free subscription has been reduced. Simply use the following promo codes below when you subscribe (or learn how to subscribe) here. The discount runs through Sunday May 26, 2019. 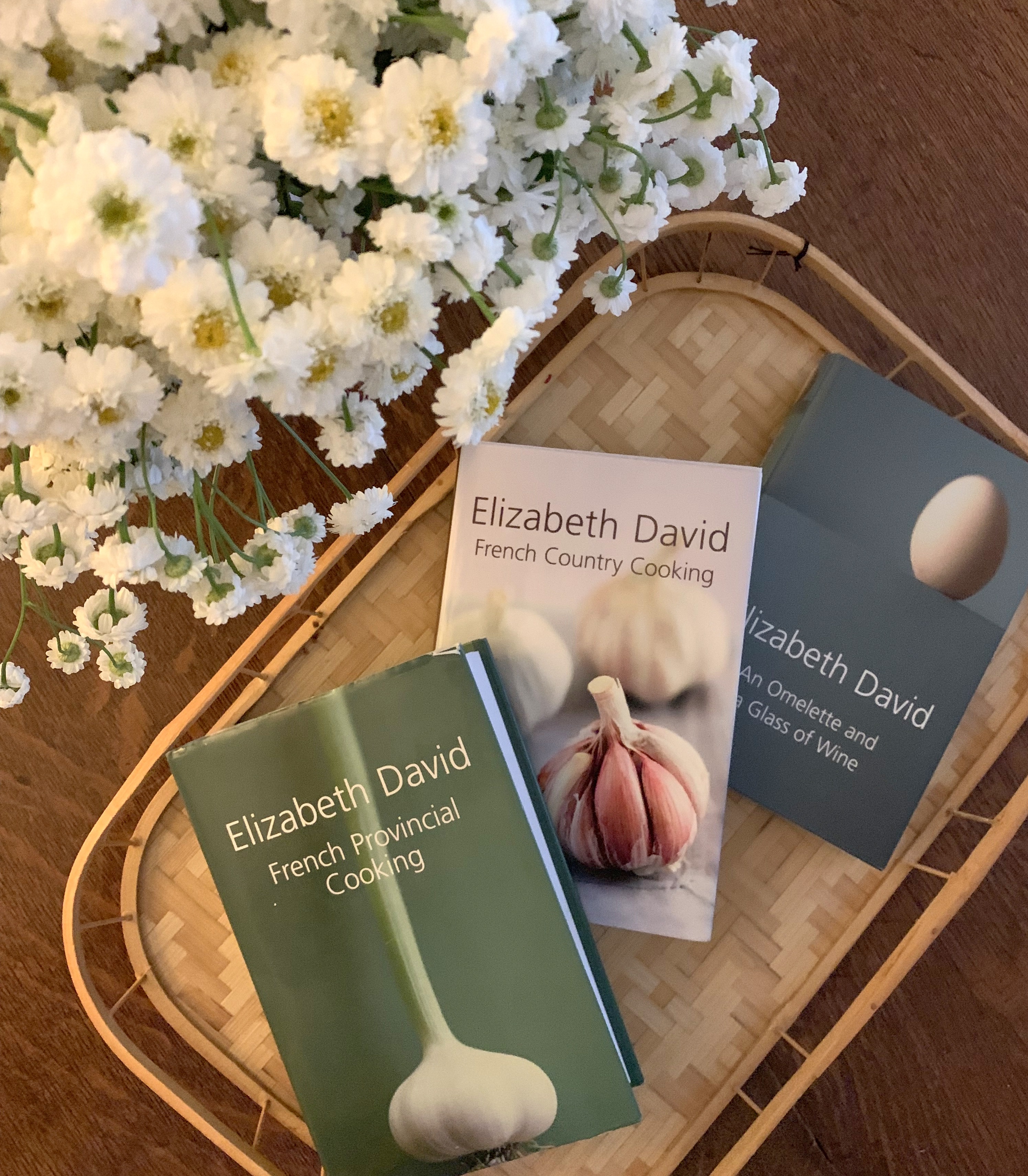 2 thoughts on “Elizabeth David, the British Food Writer Who Affectionately Introduced Readers to the Provinces of France”