Chosen often for dinner, salmon paired with vegetables is a trusted go-to. But after a while, such a simple dish, if not changed up a bit can become too rote. However, I know such a meal is a smart choice for eating well, satiating my appetite and eating seasonally, so I keep my ears and eyes (and appetite) open to exploring new ideas. And I recently found one.

Enter Judith Jones’ cookbook, The Pleasures of Cooking For One. Published in 2009 before her death in 2017, many TSLL readers probably know Jones already. Her name came to be more commonly known in Nora Ephron’s film Julie & Julia as she was the editor of Julia Child’s beloved cookbook Mastering The Art of French Cooking and continued to be her editor for many years to come. Jones also edited Edna Lewis‘s writing whose American Southern cookbooks are worth checking out as well. Learn more about Judith Jones here and her contributions to the publishing world and especially the world of food. She too was a Francophile which I thought would make this recipe fitting as the recipe for this year’s French Week.

Now to the recipe!

Seemingly decadent and saved for special occasions, cooking a meal in parchment is actually a simple way to cook and even simpler because you aren’t cleaning up many dishes.

I kid you not, in fewer than 30 minutes, I was sitting down with my meal and a glass of crisp white chardonnay. As soon as I did so, I knew this was the recipe I wanted to share with you today.

A meal-in-one so to speak as the vegetables (légumes) cook right along with the salmon (the potatoes need a bit of extra cooking ahead of time, but they go right in with the fish as well). If you are looking for a fulfilling meal, are short on time, and want to eat well, be sure to give this recipe a try.

Simply Luxurious
In fewer than 30 minutes and with not one dish to clean, you can be enjoying a gourmet fish entrée complete with vegetables. Adapted from Judith Jones' recipe in The Pleasures of Cooking For One cookbook.
Print Recipe Pin Recipe
Prep Time 5 mins
Cook Time 22 mins
Total Time 27 mins
Servings 1 serving

5th Giveaway: For the Love of Lavender Gift Basket from Olive & Branch for the Home

ep. #310: Murder in Provence — M.L. Longworth Talks About Her Series Coming to BritBox

~Click here to view all of the posts from this year’s French Week. 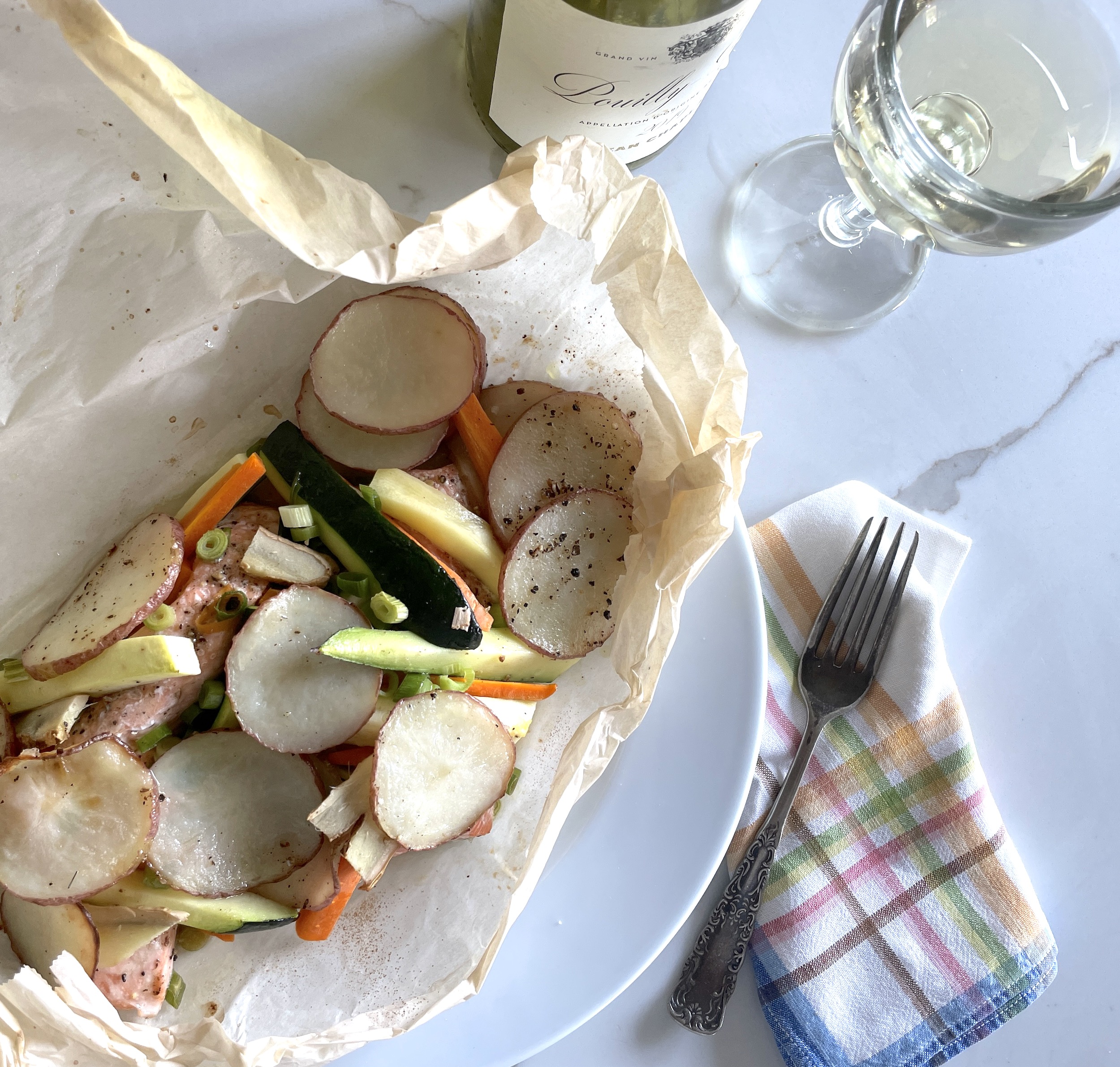