Side tables are a must, but who said they only have to function. Certainly they can be elegant and cosy as well.

After taking British interior designer Rita Konig’s online décor course last June, I can still hear the oft repeated phrase – wherever you have seating, make sure you have a place to put your drink and light (i.e. lamp) to read. I have taken this seemingly simple piece of advice to heart when planning the layout of my own home, Le Papillon. Simple décor details provide immense comfort, and such comforts really are as simple as having a place for your cuppa, a glass of wine or a favorite mixed drink or cocktail as well as having necessary, but flattering and welcoming light settle us, keep us present and release a deep sigh of easing into the moment.

Gradually, the comfort trifecta (seat-table-light) is coming together wherever I have a chair or my sofa, even near the stools in my kitchen I include and have placed a lamp on the console counter next to my island near where the two stools are situated for softer lighting.

Wanting to mix my love for English traditional décor with touches of seaside calm along with my predilection for French country and Parisian elegance, I happened upon the tea table designs and became instantly enamored. Such designs perfectly fit my lifestyle as well as my décor aesthetic preferences, and I have included one in living room and soon I hope to welcome one into my office.

While delicate in their design, a tea table is high enough to be a tea tray, but stationary and often with an upturned edge identified as a ‘pie crust’ to keep items from slipping off or hanging off the cliff and being accidentally nudged over causing them to fall to the ground. The pie crust edge in and of itself makes me smile as someone who loves a great slice of homemade pie with buttery crust, just seeing this detail delights me.

I found the table you see here on Chairish and was able to purchase it at a significantly lower price than the asking (don’t hesitate to barter – the worst that can happen is they say no). The double legs is not terribly typical, but you can find round tops, oblong tops, triangle tops, rectangular or square tops, and even fold-down tops to fit the space you have in your home most ideally.

A tea table beckons us to slow down, sit down and savor a cup of tea with a lovely nibble of an Edinburgh shortbread biscuit while either with someone or in our own company.

I often place a simple bouquet of fresh flowers on my table as seen in the pics I have shared here on the blog and IG, and a book or two I am reading as the table is next to my Poirot armchair and Hastings ottoman from Arlo & Jacobs (now renamed the Agatha chair and Archie ottoman and usually my photos are taken while I am sitting in this chair which is not seen in the photo above) – a reading nook that offers oodles of comfort in multiple ways.

Today and especially this week, as tea and savoring the ritual of tea time is the topic of discussion, I thought I’d share the history of the tea table, a handful of types of tea gatherings and traditional tea etiquette which is more fun to know just because and helpful if attending as a guest or customer at the various tea houses in Britain.

The History of the Tea Table

Tea was so frequently consumed in England during the early 1600s through the 1760s that it became one of the world’s most popular drinks. Laurel Crown’s handcrafted furniture shares how two factors helped secure tea into the British daily ritual it is today: “three successive Queens of England encouraged the drinking of tea: Catherine of Braganza, Mary, and Anne” and the tea table itself.

“The importance of the tea table which, through its domestic setting in private homes, assisted in making tea and the tea table an almost permanent addition to any home, even in modern times.” Seen as a sign of exceptional taste in the 17th and 18th century if a household had a tea table, often the centerpiece of the moment to enjoy tea, taller than a coffee table (which had not been created yet), the prominence allowed the china and silverware to take center stage. However, tea tables are more difficult to find as following the Revolutionary War, in American it was seen as anti-American to enjoy tea. Tea prices began to decline and the tea table became all but obsolete for quite some time.

However, tea is beginning to enjoy a bit more popularity in the states, even if my favorite teas currently come from England, as well as few from France. (Discover the benefits of drinking tea and a list of my favorite varietals here.)

In the inaugural British Week (2019), I shared eight ideas for hosting your own Afternoon Tea, but what if you want to have tea, just not the traditional Afternoon Tea? A wonderful online resource for all things tea – An Afternoon to Remember — shares a list of different types of tea gatherings and traditional tea etiquette. The site is full of tea making tips, tea gathering ideas, and much more. I have shared the two lists mentioned above just below.

8 Ideas for a Wonderful Afternoon Tea

I have shopped a few tea tables for you below. Many are vintage, but you can also find new designs. Be sure to keep your eye out for these treasures as when you find the one that fits not only in your home but to your tastes, I am fairly confident, it will be with you for many years to come. The bobbin leg style is also something to keep an eye out for and I have shopped a few of those for you below as well.

And, if you were curious about the Burleigh teacup & saucer, teapot tray and teapot, yep, I am giving the entire set away to a lucky reader (the 4th Giveaway this week). Become a TOP Tier subscriber to enter, and if you are already a TOP Tier subscriber, click here to read the post and enter the giveaway. But back to tea tables for a quick moment. 🙂 I have gathered up a few to peruse found on Chairish, 1stdibs and Etsy and don’t be afraid to barter and negotiate! 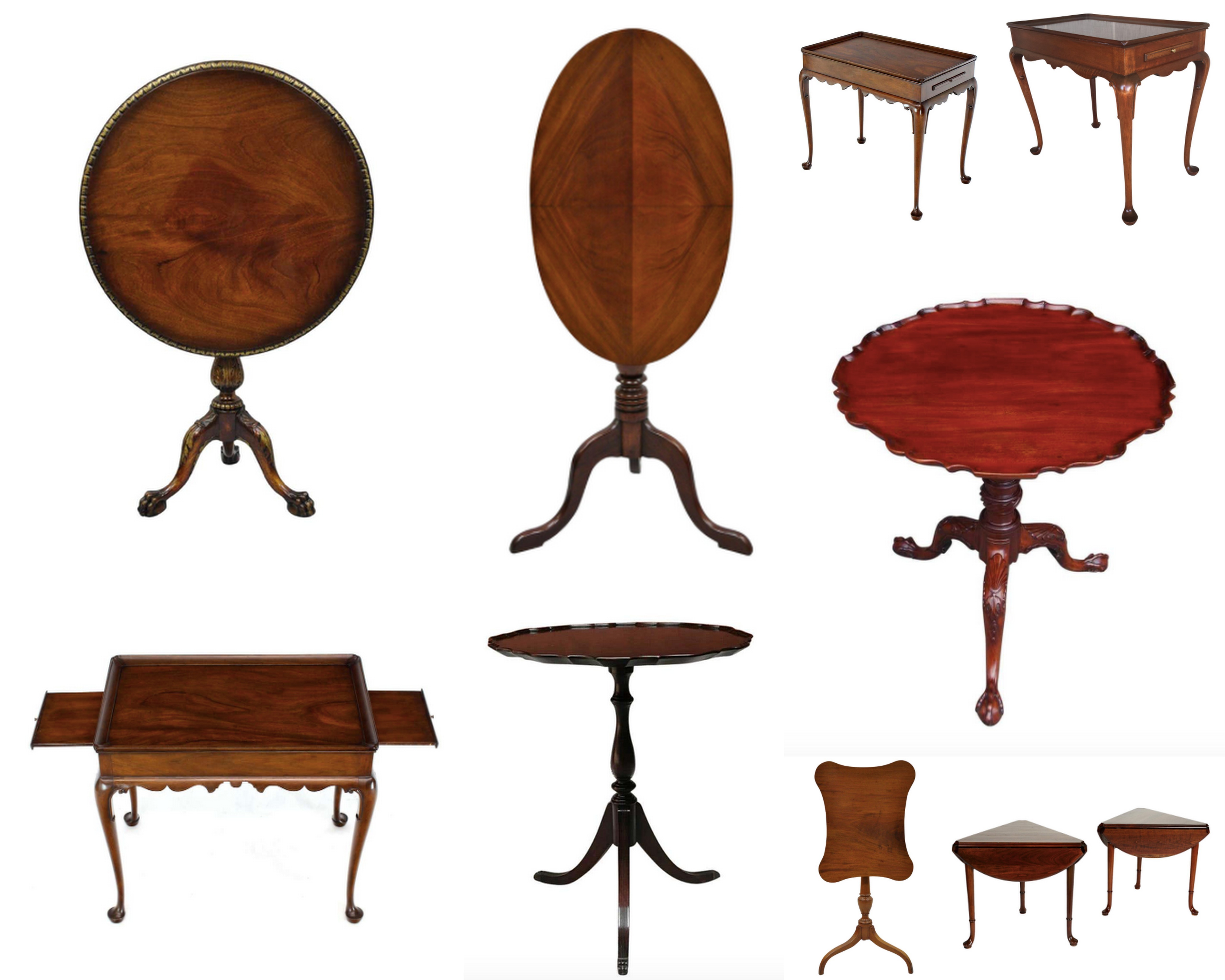 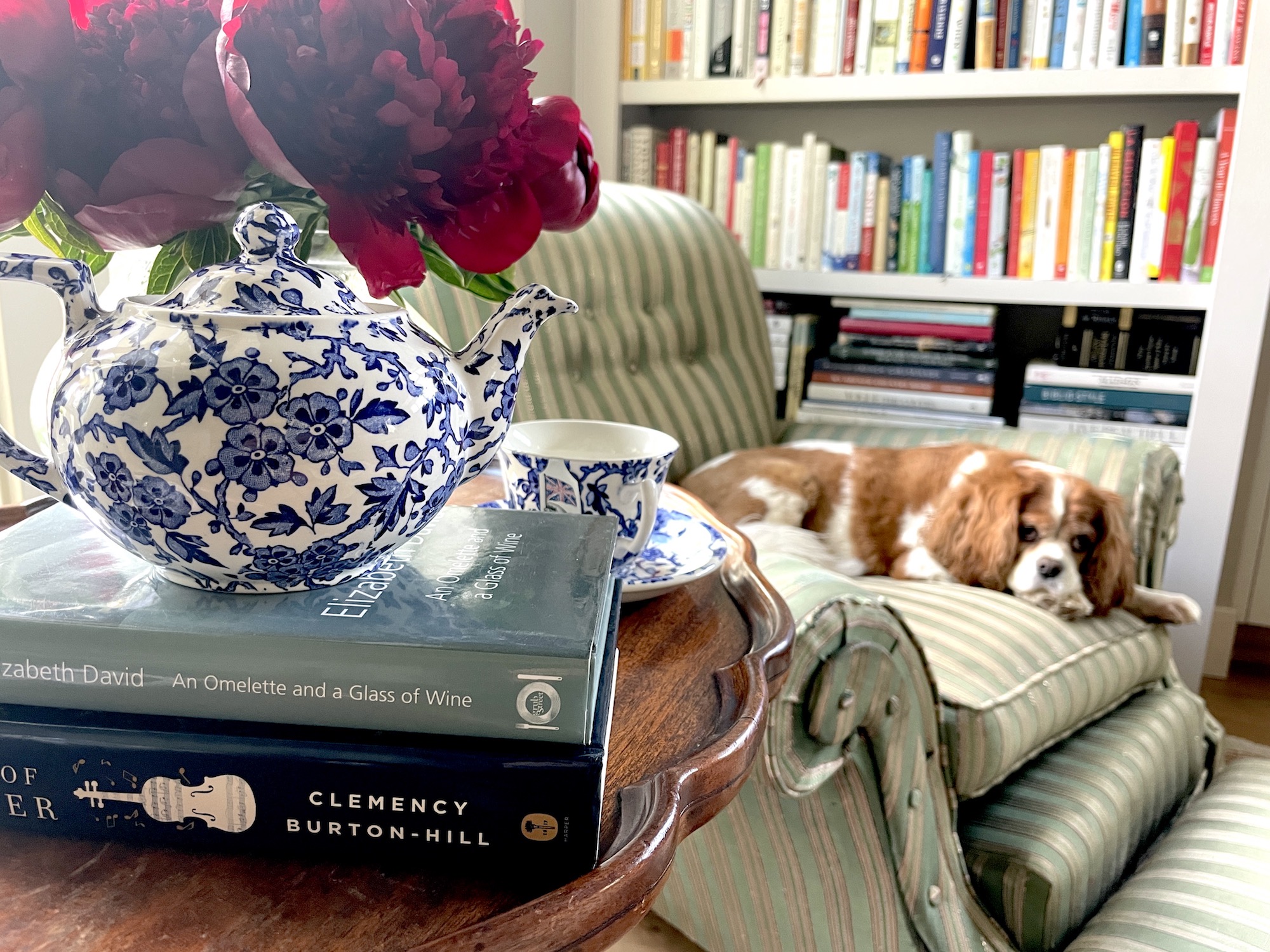 39 thoughts on “Tea Tables: Add a special simple British touch to your Sanctuary”