Did you know that originally, Claude Monet’s famous eight swooping long horizontal panels of Nymphéas capturing the natural cycles of the water lilies in his garden at his home in Giverny were destined for what is now the location of Musée Rodin? C’est vrai. But when Monet laid his eyes upon the L’Orangerie situated next to the Seine and Les Jardins de Tuileries, he shared, “Those with nerves exhausted by work would relax there, following the restful examples of the still waters, and to whoever entered it, the room would provide a refuge of peaceful meditation in the middle of a flowering aquarium.” L’Orangerie would be the permanent home of his most famous and final work of art.

The first two of the eight panels were given to the French state on the day after the Armistice of November 11, 1918, as a symbol of the peace. Described by Monet as giving the “illusion of an endless whole, of a wave with no horizon and no shore” his panels are designed as a real environment to reveal the life cycle of the water lilies. Encompassing one hundred linear meters, while we visited when each of the two rooms (there are four panels in each of the rooms) were full of visitors, even so, the use of the space utilizing the natural light streaming in from above and the panels hung upon soft French white painted walls created a feeling of calm, spaciousness and respite. In fact, it was exactly what a jet-lagged traveler needed after being away from Paris for far too long because while I couldn’t wait to return, mind fatigue and excitement that had be pent up for so many months once the flight reservations were made found me craving rejuvenation in Monet’s work, yet in an environment that welcomed in the natural light. I can only imagine what it must be like to visit in solitude and as well, on an everyday of one’s regular routine. Oh, what a dream to do so.

The Cycle of the Water Lilies (Nymphéas) was Monet’s final work as mentioned above, panels he worked on for over three decades, up until his death at the age of 86 in 1926. As many of you undoubtedly know, this piece was inspired by the water lilies in his own garden in Normandy, in Giverny. (Take a video tour of Giverny, including the water lilies here with TSLL.) Monet donated all eight panels to the French state by 1922, and all eight were finally hung by 1927. Yes, it is sadly true, Monet himself never saw his entire set of panels on display at L’Orangerie before his death.

Watch a video tour captured in 2018 during my visit to Giverny.

While today, his panels, Les Nymphéas, are highly regarded, at the time of their debut in Paris in the mid/late 1920s, they were dismissed just as many Impressionist works of art were viewed with great skepticism, a skepticism that lasted for decades, and in fact, one of the panels was damaged by a shelling during the liberation of Paris during WWII. It wasn’t until after this war and the rise of modern art that appreciation for this work, all of Monet’s work, began and has never been questioned since.

During the renovations to the museum in the 1960s, the natural light Monet had envisioned streaming softly in from above, and specified necessary for his work to be displayed properly, was no longer, and it wasn’t until the renovations that took place between 2000-2006 that the light was restored to Monet’s desire.

Our visit to the Musée de L’Orangerie was unplanned and yet serendipitously perfect for what we hoped to find, a respite and a deepening appreciation for his work. Tickets for many larger museums in Paris now must be purchased well in advance (at least one week or more for the Louvre), and as this was not the case the last time I had been in Paris (2019), I had not planned ahead which was my error entirely. Thankfully, we were able to purchase tickets a day before to visit Le Musée de l’Orangerie and it was the best detailed itinerary plans I never made.

During this trip, my mother joined me for her first visit to Paris. While my visits began long ago in 2000, I have since returned six times, but had never, to my regret, visited Monet’s work at L’Orangerie, but it was experiencing them with my mother that made the visit all the more special as we both love to garden. Of course, there is much more to Claude Monet than gardening, but I do not know if I would have appreciated his work and his objective of meditative respite had I seen them 23 years ago. Yes, I would have acknowledged without a doubt their beauty, but his purpose, I am not confident I could have felt what he intended.

Upon walking into the first oval room, there is a sign on the wall (see below) gently imploring visitors to curtail their talking. Of course, this is not monitored, and it is hard not to talk when you are in awe (see the man in the tail-end of the first clip of the video; his appreciation and hand gestures make me smile every time I see him), but what I observed were most people, if not all, adhering to this request; however, there were so many of us in each room, even 50-100 whispers adds up in volume.

I have included more than a few pictures I captured while visiting this past April, but I would like to begin with a video captured while there, and the first clip is my first view upon walking into the space of panels. I do hope you enjoy . . .

I took many moments while in the museum to just stop, put my phone away, and gaze upon the panels, getting lost in the brush strokes, swirls and waves of water. For me, regardless of how many people swirled about, I found calm, and if I had such a museum nearby on a regular basis, I would easily find myself visiting for repose and contemplation. While not all destinations we visit while traveling may be desired to visit a second time, visiting Monet’s Nymphéas at L’Orangerie will indeed be visited again many times in my lifetime if I am so fortunate.

Note: Take a photo and video tour of Monet’s gardens and home (all of the copper in his kitchen!) at Giverny in this detailed post (video shared below). 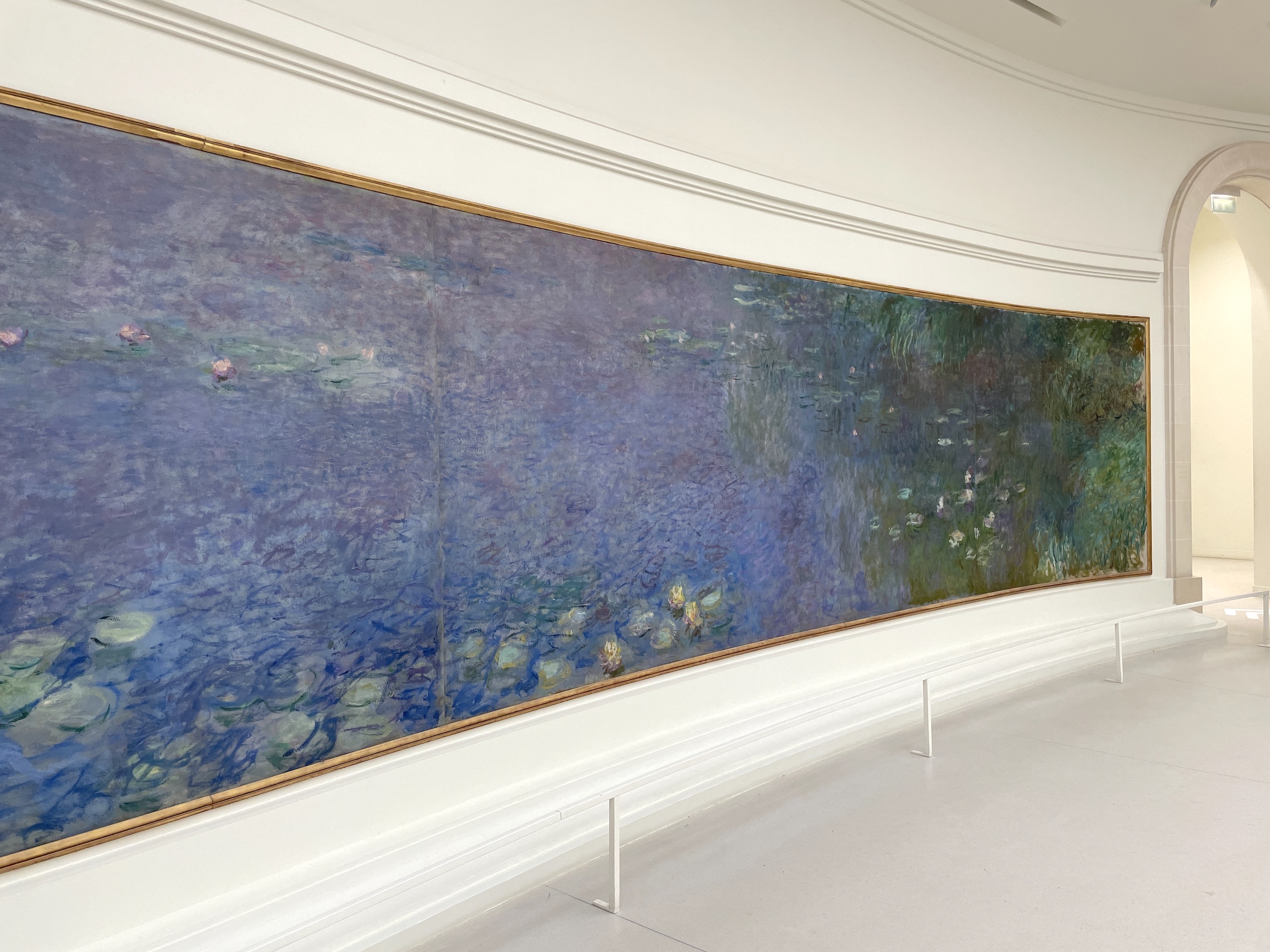 21 thoughts on “A Visit to Le Musée de l’Orangerie, The Cycle of the Water Lilies (Nymphéas) by Claude Monet with TSLL”