Long-time friend of The Simple Sophisticate podcast (she has been a guest on the show three times!) and TSLL blog (two detailed Q & A and a tour of Aix!), Provençal mystery writer M.L. Longworth’s 10-book series with Verlaque and Bonnet at the helm solving the crimes in and around Aix-en-Provence is now a series on BritBox. Yep! Murder in Provence.

With three episodes in the first season, the series just premiered on March 1st, and I couldn’t help but watch the entire series in under a week. Loved. It.

First of all the setting and videography capturing the beauty of Provence will take your breath away, and as M.L.’s series is food forward, there is rarely a scene (unless they are at a murder scene) that does not include food. From Roger Allam (who plays Antoine Verlaque) cooking in his kitchen – his apartment in the series is located in a slightly different, high-end location in Aix than what M.L. originally designated, Place d’Albertas (find out where in Aix the characters and scenes were originally placed as she took me on a walking tour of Aix in 2018), or dining at the local brasserie (which on the film is a set, but the one written about in M.L.’s books is quite popular with locales and a must visit if you travel to Aix – in fact, Le Grillon. M.L. and I first met at this brasserie and you can see pictures of it here in a detailed post in which she gave me a walking tour of Aix in 2018).

In 2018, M.L. Longworth graciously met me in Aix en Provence and gave me a walking tour of the city. Read and view the entire tour here.

Nancy Carroll stars as Marine Bonnet, and I cannot speak more highly of her portrayal of Marine who I feel plays her to a ‘T’ (except they have made her not so great at cooking – in fact, quite horrible – when in the books she is quite savvy and deft in the kitchen). The overall casting is fun, thoughtful, diverse and while changes were made, the same energy in each relationship as M.L. originally created is present. Marine’s mother (played by Patricia Hodge) is widowed in the television series whereas in the books, Marine’s father is still alive. However, again, knowing your audience and wanting to have a breadth of relationship situations is a smart idea, and Hodge is fantastic at conveying the energy and ideology Longworth created in the novels. Keala Settle plays a key reoccurring main role as Hélène Paulik, the police ‘partner’ of Verlaque and trusted confidante, and her chemistry with Antoine (Allam) works very well.

If you have read the entire series thus far (a 10th book will be released on October 4, 2022), you know that Verlaque and Bonnet are younger in the books than how they are depicted on screen. At first I wasn’t sure how this would work, but I must admit, I think it will work out far better. Likely the audience of BritBox was considered, but also the potential for storylines. The unique and far more modern approach to their relationship is welcomed in the genre of cozy mysteries, and I personally find this duo to be my favorite of sleuthing duos of all of the British/French mysteries I watch, which is hard to do because there are some awesome pairings out there.

The crew and cast filmed for three weeks in and around Aix-en-Provence and Cassis this past September, and spent the remainder prior to the on location time on a set in England for 8-9 weeks. I have corresponded with M.L. a bit to hear what her thoughts were about the series, and as she had an advance viewing of all episodes, she said she was pleased and thought the chemistry between Allam and Carroll worked very well. On that point especially I agree (listen to my interview with her about the then upcoming series in episode #310). These two leads do have a fun, genuine and bantering chemistry, and it is in the first episode that it is quite strong. And, it is interesting to note that the episodes were written for the screen by Shelagh Stephenson who wrote for Downton Abbey. Not a shabby behind the scenes production and writing crew!

In episode #310 of this podcast, knowing that BritBox was bringing this series to television, M.L. Longworth joined me to talk about what she knew and all of the details readers/listeners were curious about. Have a listen here. (we talk about food as well – bien sûr!). Also, here is an interview Longworth has with The Daily Mail (UK).

Another detail I especially enjoyed was Antoine’s car, an old, but well-cared for, Citroën DS. It is a supporting character for sure as they toodle about the region of Provence interviewing suspects and witnesses.

And you might be wondering why are they speaking English when the characters live in France? Well because that is what M.L. wanted! She explains in this episode (#203) of The Simple Sophisticate podcast (our first chat) and to The Daily Mail that she loves British mysteries, and yes, is a fan of Agatha Christie, and similarly to Oxford, Aix is famous for his well-know legal schools and a hub for culture and food!, and well, she has been living in Provence for more than 25 years, specifically Aix for many years before moving just outside of the city. In fact, it was Longworth’s apartment near the chapel/steeple that she based Marine’s apartment on.

Below are the books in M.L. Longworth’s series that correspond with each of the episodes of Murder in Provence.

The third episode is based on the 3rd book in the series (very loosely), Death in the Vines.

Nancy Carroll’s (Marine) wardrobe immediately captured my attention and many viewers as well as TSLL readers, so I have shopped six outfits from the show, finding some of the exact items (that blue crossbody bag!). You can read that detailed post here.

With the production starting the series with the first three novels in the series, I am cautiously confident they are hopeful the series will continue. After all, there are currently seven more to draw from, and M.L. (Mary Lou) usually releases a new mystery each year. Now that she is retired from teaching Writing in Paris, she has time to wholly focus on her writing (something she talked about in this episode), and I look forward to each new book. Is it October 4th yet? ☺️

Check out the trailer below:

Pre-order the 10th book in the series (release date – October 4, 2022) Disaster at the Vendome Theatre

Listen/Read past Episodes/Posts with M.L. Longworth

Aix-en-Provence & M.L. Longworth Talking about the Paris of the South of France

Aix-en-Provence, Art and a Mystery to Solve: M.L. Longworth about her new mystery, Spring in Provence, and what she’s cooking in her kitchen

episode #310: Murder in Provence, M.L. Longworth Talks about her Series coming to BritBox 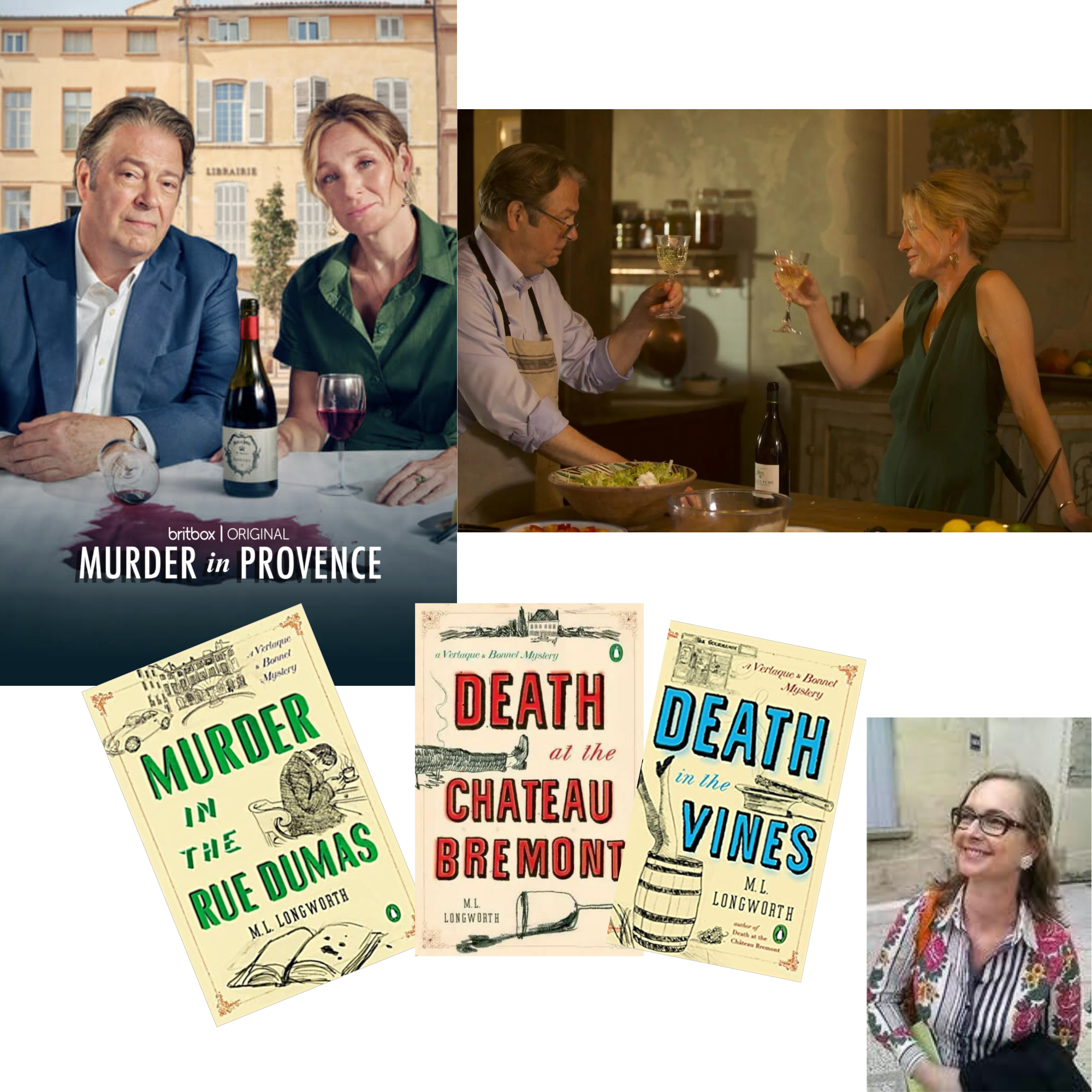