Streaming television series from the past has been a pasttime for me during the 14 months during the pandemic. It was during this time, thanks to many TSLL reader recommendations, I discoverd many of the shows on today’s list. Zooming through or pacing myself depending upon my schedule, my need for a cosy-snuggling in or the weather requiring staying inside, these series along with many British cosy mysteries (a top post of all-time here on TSLL) were a simple luxury I savored and continue to savor as rewatching is often just as fun if not more because I catch a few more jokes and see a few more details.

I would like to share with you today 10 British Comedies and/or Dramedies I have thoroughly enjoyed for one reason or another since beginning my perusal into the BBC’s archives. I have included a trailer for all but one of the series so you can take a peek at the characters and premise. Nearly all of the ten can be found on BritBox, a few on AcornTV and one on PBS Masterpiece. All are found on Amazon Prime through the aforementioned streaming service subscription.

While some of the series are more than three decades old, I am fascinated by the sets, the clothing, the current events being presented at which to poke fun as well as the cultural changes and evolutions (oh, and the hairstyles as well – ala Lovejoy ;)). I do hope you find a new-to-you series which makes you chuckle and lightens your days. Let’s get to the list.

A lot of a comedy, a bit of a drama and yep, a mystery of some sort in each episode, but no murders – simply crimes occurring in the antique world. Ian McShane stars as a Lovejoy – an antique dealer who is more likeable than he is a bit shady in his dealings. A young and brilliantly chic Phyllis Logan (Downton Abbey) also co-stars in four of the seasons alongside a reoccurring cast I found myself greatly enjoying – Tinker is absolutely adorable and hilarious. Based on the novels by John Grant under the pen name Jonathan Gash (view the novels here), Lovejoy ran for six seasons, and each season improves upon itself (okay, if I am being honest when Phyllis Logan left after four seasons, I missed her greatly, but they did well aprés Lady Jane’s departure).

2. To the Manor Born

Premiering in 1979, Penelope Keith and Peter Bowles star in three seasons of On The Manor Born, then return for a special episode 25 years later in reunion fashion. The series was the most popular comedy in Britain of the 1970s even after airing for only one season, and the satirical jabs at the differences between the classes as well as old money vs. new money will prompt some good laughs.

The first episode will set the scene as Lady fforbes-Hamilton lays her husband to rest and has to sell the manor on which she has lived her entire life. Enter Peter Bowles’ character, of immense as well as new money, to buy the manor, and the love-hate relationship ensues.

3. The Vicar of Dibley

If you want to laugh, I mean really laugh, watch The Vicar of Dibley. Starring Dawn French, this series was recommended to me by a long-time TSLL reader who lived much of her adult life in England, and I cannot thank her enough (thank you Kameela!). Starring alongside French is Emma Chambers (Notting Hill), James Fleet, Trevor Peacock and more who make up the town’s extremely conservative church council in the fictitious English countryside town of Dibley. Needless to say, when French arrives as the new vicar, comedic clashes of interest occur.

An even more absurdly hilarious comedy, Blandings is based on P.G. Wodehouse’s castle stories, and premiered in 2013. “Set in 1929, Lord Emsworth resides at Blandings Castle, along with his imperious sister Connie, his empty-headed son Freddie (Jack Farthing), and any number of houseguests, love-struck nieces and their boyfriends. He would rather be left in peace with his prize pig The Empress, but his family is always at hand to complicate his life. Offering a reluctant helping hand is his loyal and long-suffering butler, Beach.”

As you will see in the trailer below, a hoot of a series and ridiculously odd-ball fun.

I was first introduced to Britain’s long-running comedy when I saw in-person the theatre adaptation in 2012 (view the trailer below of the stage presentation). I found myself bursting into laughter in the theatre (revealing my American-ness, as the rest of the laughter was much more muted), but I could not help myself.

Upon returning to the states, I watched the series from which the play was inspired, and found it to be quite a lot of fun.

Originally premiering in 2018, John Cleese stars alongside Alison Steadman, both of whom “the plot revolves around, as they are two retired neighbours who live in Stoke Poges. The two neighbours are planning to start a new life together when Edith’s [Steadman) son arrives, her 49-year-old son, moving back in with his mother after his has walked out on his marriage and family.

Included in a This & That a handful of months ago, I have found myself returning to watch this series. I have returned to the most recent series (one season) partly because the setting is quintessential coastal English gorgeous, but the humor is quite hilarious as well (as it is in the first series). The original series, both based on E. F. Benson’s six-part series of Mapp & Lucia which focuses on idle women in the 1920s and their struggle for social dominance over their small communities, stars Geraldine McEwan and Prunella Scales while the most recent stars Anna Chancellor and Miranda Richardson.

8. The Trouble with Maggie Cole

I just learned of this series from a TSLL reader this week. I quickly took note, found it on PBS Masterpiece and watched the first four episodes this week. I am absolutely enthralled. The plot, the acting and yes, the setting, keep my attention. Dawn French (from The Vicar of Dibley) stars and thus I am sold. The series just premeired on PBS last fall. Take a look at the trailer below, and thank you again for the recommendation. 🙂

Another absolutely, absurdly hilarious series to savor. I happened upon Ladies of Letters quite a few years ago, and didn’t know what I had found, but enjoyed the hilarity. Starring Patricia Routledge and Prunella Scales (Mapp & Lucia), Based on a 13 year long BBC 4 radio series, which originated from books by directors/actresses Carole Hayman (“Rides”) and Lou Wakefield (“Firm Friends”), who also wrote the TV series Ladies of Letters centers around these “two middle-age English widows who become best friends via letters, over many misadventure-filled years. Having met under a table at a wedding, when both were drunk with merriment, misunderstanding comes naturally to them.”

A regularly recommended show on TSLL’s weekly This & That post (look for it each Friday on the blog), Last Tango in Halifax is superb in so many ways. The cast, the diverse life stories being told, yet all set in a small English country town – Halifax. I would describe this series (now having just wrapped up its 4th season) as a dramedy, but certainly not too serious by any means, and a joy to watch. Have a look at the trailer for the first season and then just below, the trailer for the most recent season which just wrapped up in 2020.

Admittedly, I am just getting started, and would love to hear from you what British comedies or dramedies you most enjoy and would recommend. Please do share in the comments. 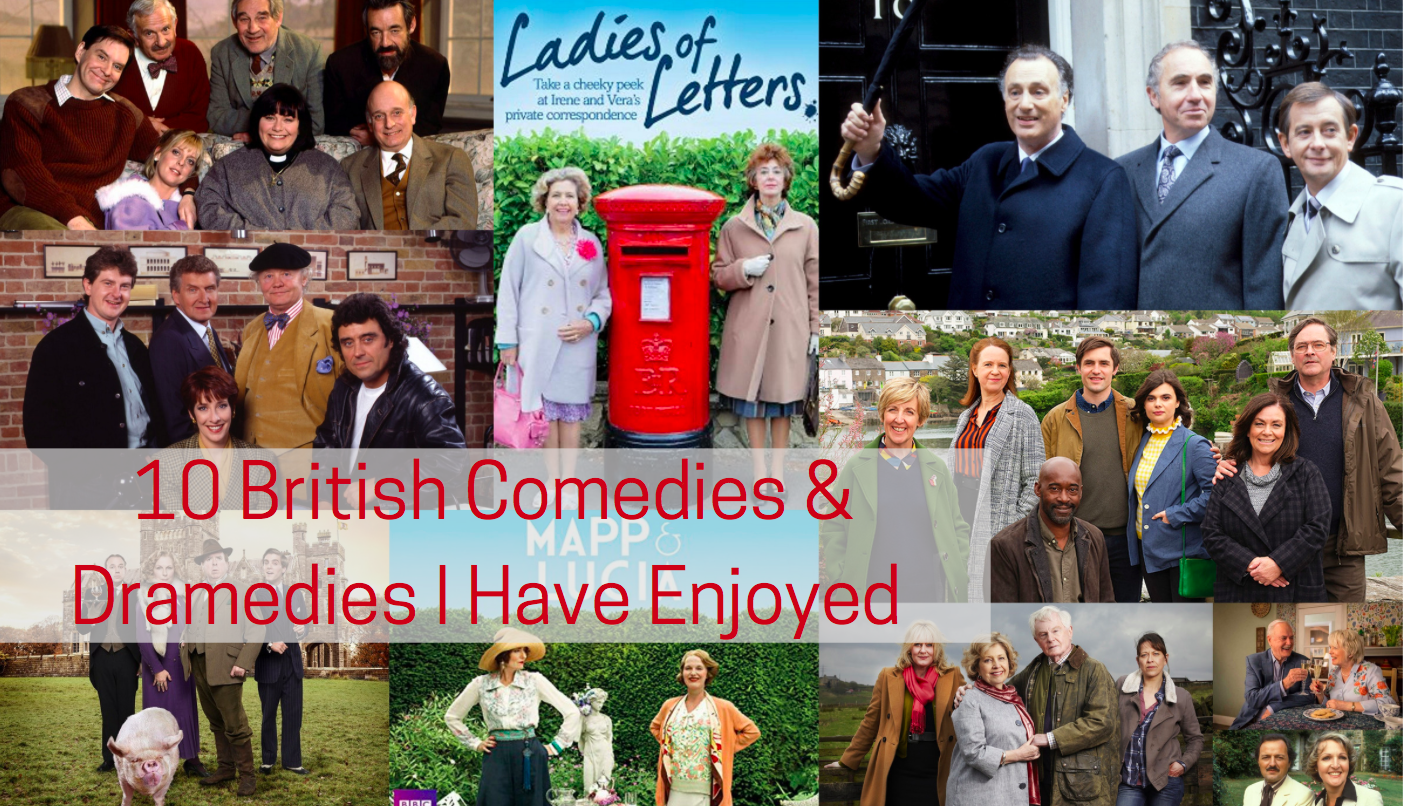