Combine beautiful French backdrops either in Paris, Aix, Lyon, or any one of the major urban French hubs, or slip away to the French countryside – chateau valley aka as the Loire Valley, Provence, Normandy, Brittany, or even the Riviera with many more locales to tempt your love of exploration; pair with perfectly imperfect leading women and men, hand them a mystery to apply their astute, uncommon sleuthing skills and voilà! The French cozy mystery.

Last spring I shared a list of 16+ British Cosy Mysteries I recommend (the list continues to grow and be sure to check the comments section as readers recommended many more), and I quickly learned how much TSLL readers enjoy their cosy mysteries. Knowing many readers are also Francophiles, I have since been exploring the MHz Choice streaming platform (available through Amazon Prime as well as on its own) and finding many French series which satiate the need for resolution that only a simple cozy mystery seems to provide – all is well with the world! The mystery is solved in 50 or 90 minutes! – as well as provide an opportunity to be exposed to the French language.

Having recommended a few individually over the years – most recently as a Petit Plaisir of episode #298 (see here – Blood of the Vine), I wanted to compile a list which undoubtedly will grow as I continue to explore so you would be able to easily access whenever you want to explore a new series.

Recently, with winter upon us, I have found myself exploring French series more frequently, as it has provided an escape, but one with a touch of learning and feeding the yearning for returning to France whenever it becomes safe to do so.

Today’s list includes only series which I have viewed and enjoyed. Each of the series are unique in their own way, so I have shared their individual components and what to expect in a bulleted list below each one. For example, if you are looking for a light-hearted cozy mystery series, I wouldn’t recommend Paris Murders as it is a dramatic, dark at times and not comedic or humorous in any way. And if you are looking for something serious, you may not want to watch Agatha Christie’s Criminal Games. Let’s get to the list, shared in no particular ranking order. 🙂

1.For Francophiles who are also Anglophiles and want a little retro escape to France paired with humor

3. For the Midsomer Murders fan

5. For those who enjoyed Last Tango in Halifax + a dramatic murder added to the plot

Now, I will be getting back to exploring even more series and will be sure to add to this list as I find ones I love and I think you might as well. 🙂 Have a look below at my favorite French films if your French predilection is in need of more to explore.

The Art of the British Cosy Mystery: 16 Cosy British Mysteries to Enjoy 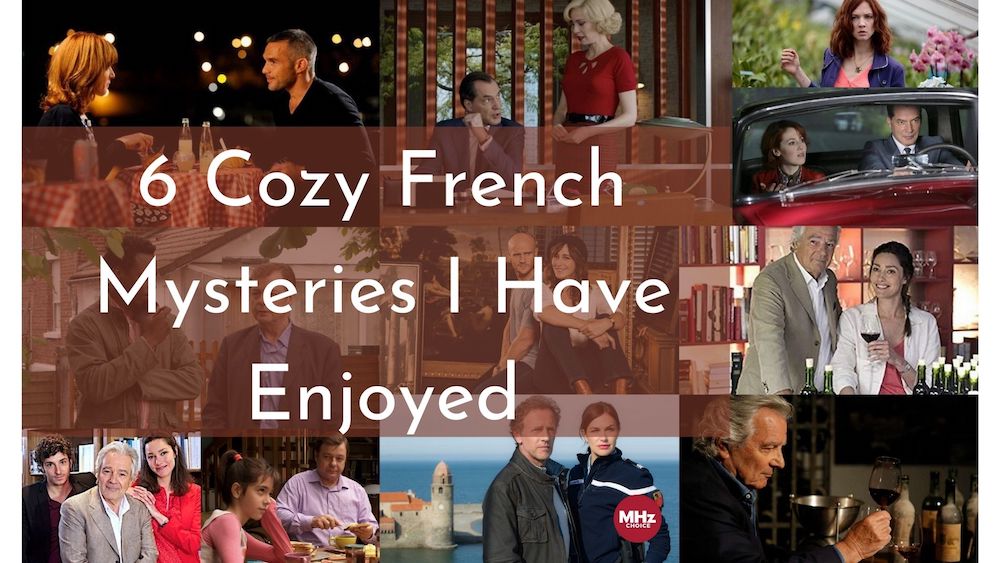 13 thoughts on “Escape to France (and solve a mystery)! 6 Cozy French Mysteries I Have Enjoyed”