For the last night of our trip, I chose to stay at The Savoy, for a bit of London history, luxury, and quite simply to satiate my curiosity about a hotel I have long known about and wanted to peek inside. 🙂

Opening its doors for the first time in 1889, The Savoy was the first purpose-built deluxe hotel in London which raised the bar for luxury, service and comfort for its guests. As many books have shared over the years, the stories of the glamourous, the wealthy, the politician, even the chef, have often involved The Savoy hotel in London, situated in proximity to The Thames River in the heart of the city.

Interestingly enough, it was a stay at an American hotel that inspired Richard D’Oyly Carte to build The Savoy as the luxury hotel it was to be. Adopting new technologies as the American hotels had in 1870s and early 1880s, he wisely sought to bring such capabilities to London in his new hotel.

Installing electric lights throughout the building, electric lifts, and bathrooms in most of the lavishly furnished rooms making available constant hot and cold running water, The Savoy was ahead of its time and its competition. And it was Carte who hired César Ritz as manager and Auguste Escoffier as chef de cuisine; between the two, “they established an unprecedented standard of quality in hotel service, entertainment and elegant dining, attracting royalty and other rich and powerful guests and diners”. A couple of years ago, I read this book, Ritz & Escoffier: The Hotelier, The Chef & The Rise of The Leisure Class and found it fascinating. Particularly from the point of view of Escoffier’s journey, but also as the hotelier César Ritz. If you enjoy history, Britain and France, revolving around luxury, travel and food, you will enjoy this book.

The pair of men, both talented in their craft, were partnered at The Savoy when it opened in 1889, and this book tells the story of how they changed forever how Britain and the world engaged with each other.

Prior to becoming The Savoy hotel in 1889, the location had been many things, a hospital for nearly two centuries, a prison, suffered a destructive fire, and then purchased in 1880 by Carte who wished to turn it into a building to host operas. As well, many a well-known guest over the now more than century of being The Savoy hotel has stayed – from Claude Monet who painted the Charring Cross and Waterloo Bridges seen from his hotel window (although whether or not he stayed at the hotel is debated – see this post), WWII war leaders such as Winston Churchill visited and met in The Savoy during wartime, Audrey Hepburn, Fred Astaire, many monarchs from around the world including the future King Edward I (Queen Victoria’s son), Bob Dylan (and filmed one of his music videos at the hotel as well), Louis Armstrong, Marilyn Monroe, and the list goes on and on.

As well many films have captured scenes in the hotel, and while we were there we ran into a couple of the film crew’s ‘grunts’ who told us that Halle Berry and Mark Wahlberg were currently there filming scenes at night (we did not see them). We’ll see in a couple years time if that is the case. 🙂 But more notably, the finale of Notting Hill was filmed at The Savoy with Julia Roberts and Hugh Grant.

Often described or called “London’s most famous hotel”, The Savoy has 267 guest rooms, and in the most prestigious rooms, offers panoramic views of the River Thames across Savoy Place and the Thames Embankment. And now to our stay this past April.

Turning into The Savoy Court, the turnabout circle where guests are dropped off and picked up, you instantly know where you are. And there is no mistaking the twin revolving doors that sweep you into the foyer.

We booked a single room with two twin beds, and the luxury of the linens, including the German down pillows provided one of the sweetest nights of sleep I had during our entire trip (and that was tough competition as the previous accommodations were lovely).

We arrived a few hours before our check-in time, but not to worry. They took our luggage and welcomed us into The Reading Room, just off the main entrance, solely for hotel guests. The art deco furniture paired with the quiet space away from the entrance invited you to relax, and you also had complimentary service and waitstaff offering biscuits, drinks and well, comfort. My mom settled in while I ventured to New Oxford to visit the umbrella shop I will write about later this week to pick up one of their foldable umbrellas – James Smith & Sons.

In no time however, The Savoy had our room prepared, well before our stated check-in time, and our luggage was waiting for us in the room while a host took us up to our room sharing with us all of the directions and places to go about the hotel and for what meal, etc..

Oh! While we waited in The Reading Room, the ladies’ and men’s rooms near The Thames room were a sight to see (pictures included below). The foyer leading into The Thames Room includes a portrait of Queen Elizabeth II, and as we were staying at The Savoy just two days after Easter, this oversized chocolate egg was decorating the foyer. It is real chocolate. Oh my goodness.

Upon arriving and settling into our room, we had an interior facing room which I expected. Staying at The Savoy is a luxury in and of itself, which is why we only booked one room, whereas we each had our own rooms at all of the previous accommodations during our trip. However, it was a luxurious room. In fact, our room had American outlets. No need for adapters. Yep, they thought of everything, knowing from where we were traveling.

The walls were papered in grasscloth. Loved this detail, which is, yep, a luxury. It added a texture and thus a warmth to the room even though cool tones are used that welcomed you to your space and asked you to relax and as the same time, erasing any gloom if it were gray or raining outside.

The television as you can see here, while we didn’t use it (except to watch the House of Parliament as on the day of our arrival to the hotel was the day the formal No Confidence letter was presented and the Prime Minister had to respond for hours to the MPs questions), welcomed us in tailored style.

The details – the lightswitches.

The bathroom included a full-length cast-iron tub that was 6-feet long. Oh. My. Goodness. I was in absolute bliss. A six-foot tub is unheard of, so I savored it upon preparing for our night out to the theatre.

An important detail to note: The height of the ceilings. They soared above us, making the room feel far larger than it actually was.

As well, as I have shared on IG Stories and on this week’s podcast episode (#329), the guest service and concierge was, well, they make sure you feel right at home. My ivory silk blazer had become covered in soot after an incident in The Tube a couple of days prior, so I asked if The Savoy could clean it for me as I imagined the best place to clean an item with soot is in a city that has probably seen this issue before (in other words, I wasn’t confident my dry cleaner in Bend would be able to get it out). They took my blazer without hesitation, and in 24-hours, before we grabbed our cab to head to the Heathrow, they gave me back my blazer, fully cleaned and only costing me £23.50. As well, since we as American citizens were required to show a negative Covid test, The Savoy staff is certified to monitor and administer both types of tests for their guests. So we tended to that after paying £50/each for our tests, which were negative, easing our minds that we would be able to fly home the next day without a delay.

Interior Rooms Throughout The Savoy

My mother sitting in the foyer just in front of the doors (back to the right) that lead to The Reading Room.

The back of the giant chocolate Easter egg.

The twin elevators just near the lobby.

The Savoy‘s location makes it an ideal accommodation to stay if you too enjoy attending the West End’s many theatre performances. As I will share later this week, we had tickets to go watch Agatha Christie’s The Mousetrap, which was only a couple of blocks away, a 7-10 minute walk.

While we may have only stayed one night, it was a most wonderful night and occasion. And pairing our stay with a night at the theatre, well, that was just perfect.

Captured while I waited for my silk blazer from the dry cleaners and for our taxi. 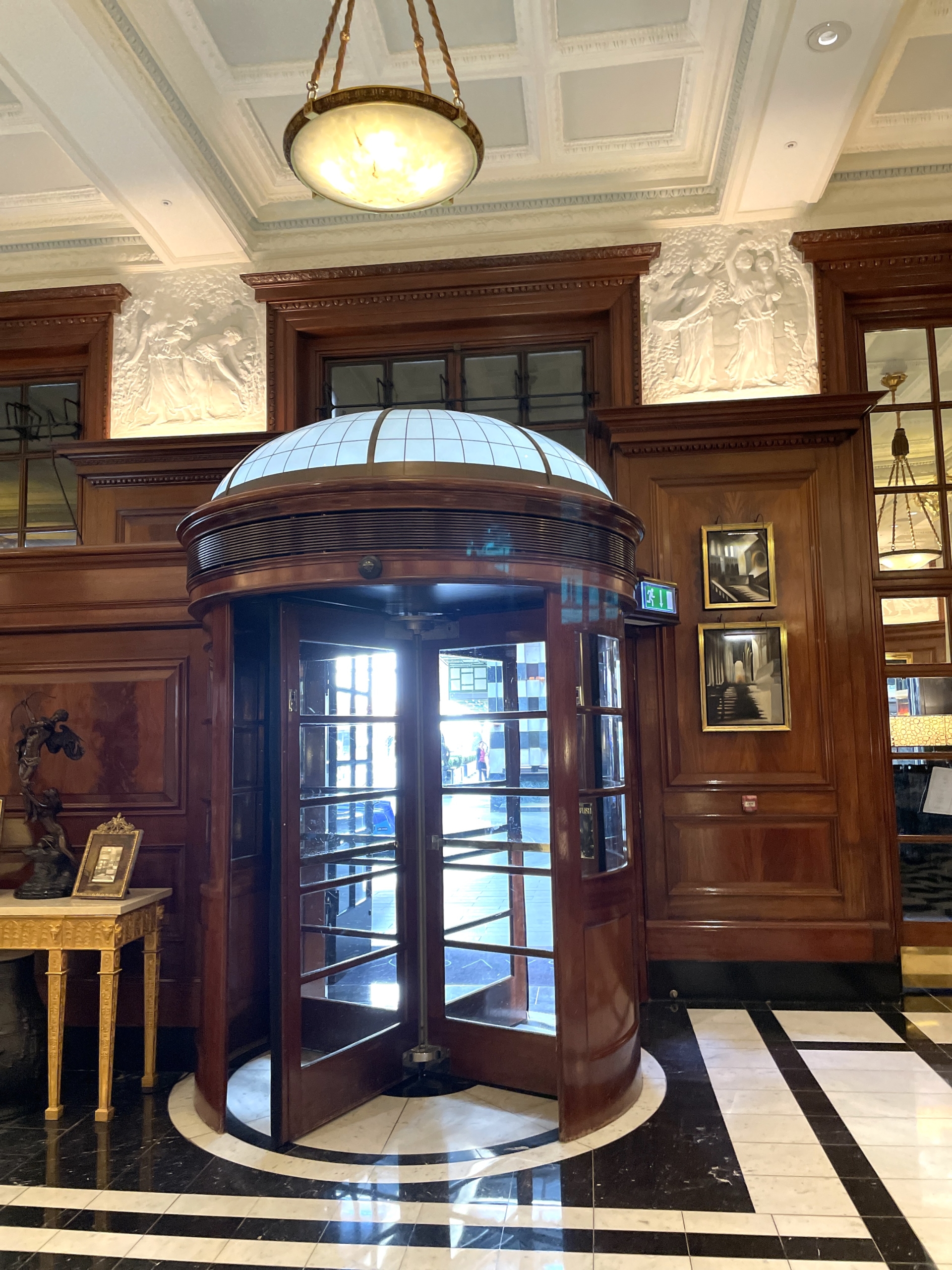 26 thoughts on “Staying at The Savoy in London”