“It won’t run that long. Eight months perhaps.” —Agatha Christie about the premiere of her play in 1952, The Mousetrap

Twenty-eight thousand and five hundred-plus performances and 70 years later, the show goes on as they say and looks to be going strong for many years to come if our sell-out performance on April 19th this past month is any indication.

With the world premiere taking place at Theatre Royal in Nottingham on October 6, 1952, what we would now call previews, it made its rounds to a handful of theaters and officially debut later that year at Ambassadors Theatre on November 25th, remaining there for 22 years until 1974. It was then that it moved just next door to St. Martin Theatre and has been there ever since.

St. Martin’s Theatre is historic in and of itself as it is still owned by the family whose original owner and builder, the 19th Baron, Lord Willoughby de Broke, passed it down through the family and his grandson who in 2017 celebrated the theatre’s 100th anniversary.

And the theatre is quite a gem. Be sure to view my short video below that gives a real-time moment as we sat in the theatre waiting for all of the audience to arrive.

What amazes me still is how as someone who has read quite a bit of Agatha Christie, currently mainly Hercule Poirot capers, watched all of David Suchet’s Poirot episodes, all of the Miss Marple episodes and both of Kenneth Branagh’s films based on her two most popular long-form mysteries is that I honestly did not know who had ‘dunnit’ as they say until I sat down and watched the play. And don’t worry, I will be sharing no spoilers as I swore, along with the rest of the audience, an oath of secrecy. 🙂

The history of this play astounds as it continues to captivate audiences of all ages, and there were all ages in the theatre, and all were intrigued as made clear during the intermission when strangers began talking to strangers to discuss who they thought had ‘dunnit’.

Well-known actors have starred in the play over the years and it continues to be a play those in the theatre and acting business genuinely hang their hat on to be a part of at some point during their career. From Patrick Stewart to Hugh Bonneville (of Downton Abbey fame) – two names well-known to American audiences, and oodles of actors better-known to Britons, a true testament of its beloved script is the fact that many actors (I use the term actors to include female and male artists) have played different parts throughout their career.

Also, the original set which remains the same throughout both Acts is quite similar as we see it in 2022. Roger Furse was the original designer, and in 1965 Anthony Holland created the set we see today with wood-clad walls encircling the entire space creating a warm countryside manor sense of regality while the winter weather keeps the guests inside (well, most of them). It is interesting to note that the only design piece that was used in the original production in 1952 is the mantelpiece clock, although the leather armchair hung on until 2004.

As Christie’s gift is to throw plausible red herrings steadily along the way to keep the audience wondering, The Mousetrap is no different, and expertly holds the audience’s attention until the revelation of ‘whodunnit’. I would most definitely watch the play again as the cast, whomever is currently starring, doesn’t miss a line, not a misstep was seen, and if you watch closely, so many small hints are revealed if you know prior to beginning the play ‘who dunnit’ which makes it delightful in another way, yet equally enjoyable.

Here is a peek at the plot as shared by St. Martin’s Theatre and London Theatre.

As I shared in this post, we stayed at The Savoy which makes the walk to St. Martin’s Theatre a short few blocks and just 7-10 minutes if you are slowly strolling. Even if visiting London for one night to see a play in the West End, pairing a luxury accommodation with a memorable outing to spend time at a theatre makes for a memory unforgettable.

Purchase tickets for The Mousetrap here.

Staying at The Savoy in London 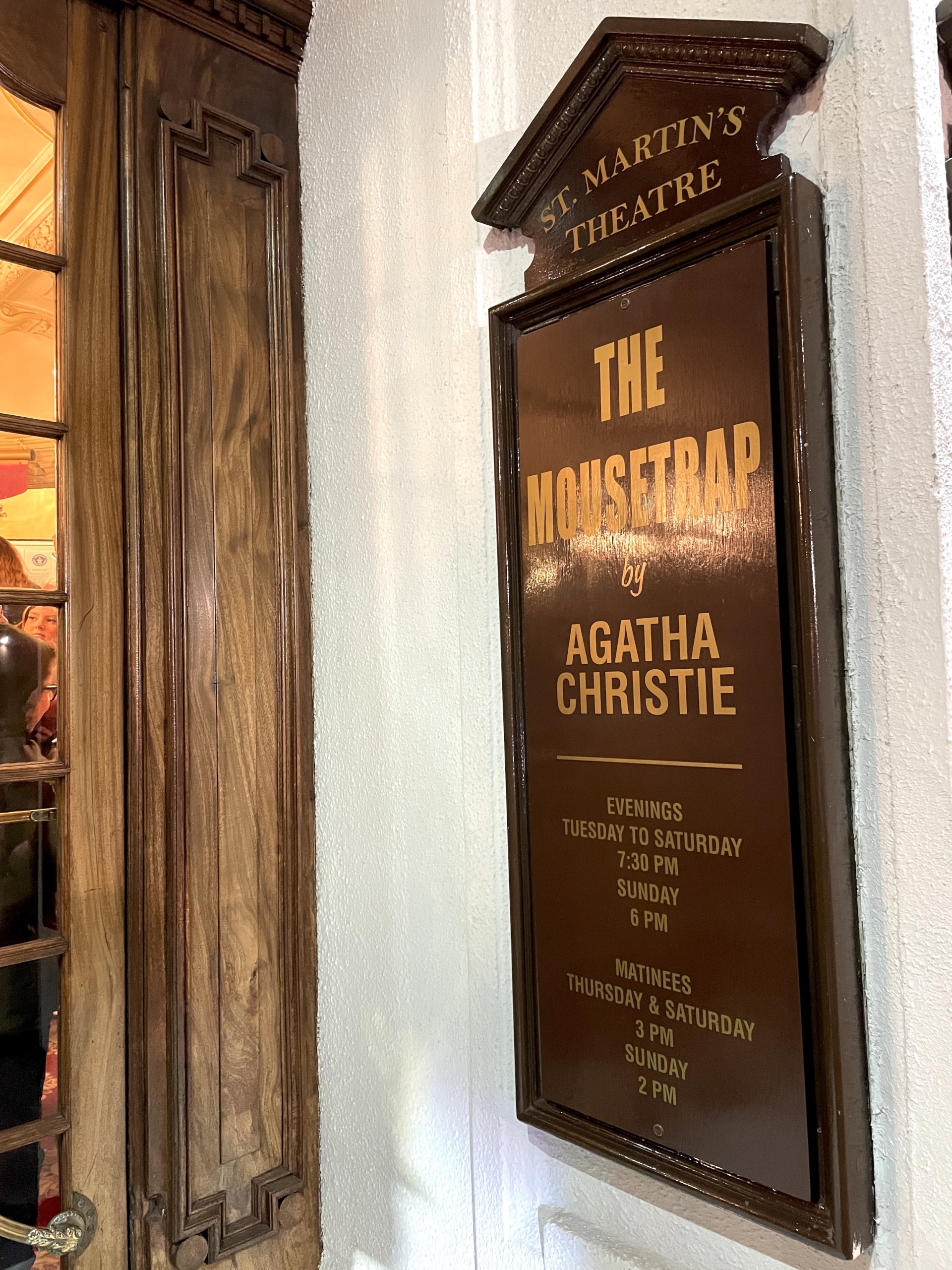 13 thoughts on “Going to the Theatre: Agatha Christie’s The Mousetrap at St. Martin’s Theatre”