As you read this post, I am en route across the pond returning to the states. Paris has been quite kind, and in the five days here has revealed many well-known beautiful sites as well as hidden treasures.

I must say the must-see sites during my second visit wore my legs out (and my feet as I was resolute in wearing flats instead of trainers), and I discovered, and was reassured, that the simple things truly are the greatest of luxuries. For example: beginning the morning with a quick walk to the neighborhood boulangerie to pick up a fresh baguette for breakfast to be enjoyed with strawberry jam, tea and espresso, sipping a glass of rosé wine mid afternoon, and losing track of time in conversation at outdoor cafes either over a lovely dinner or simply a cup of espresso or tea.

As I gather my thoughts about the trip and lessons learned during the flight home, do stop by early next week when I will share with you what Paris and London have taught me about living a most simply luxurious life.

Here is a look back on this past week on the blog, and please note that the weekly Friday newsletter will return next Friday (August 24th) and will include a subscribers’ first-to-know about an upcoming giveaway.

~London’s Closing Ceremony & British Models . . . fashion was invited to the Olympics and it was golden . . .

~This & That: No. 20 . . . stylish athletic clothing, Vogue Paris, a delicious English dessert and more

~A fantastic guest post from Frances Schultz, a contributing editor to House Beautiful . . . Why Not . . . Welcome Houseguests with Style?

~A lovely visit and worth the search . . . Manolo Blahnik – Worth the Investment

Below, enjoy a few photos captured while strolling and soaking in the beauty that is Paris.

~A warm day in Paris, strolling through the Tulierie Gardens with Le Tour de Eifel in the background. ~

~The famed Angelina Tearoom, lauded for its chocolat chaud and mont blanc was once frequented by Coco Chanel and Proust. We stopped in after lunch on Thursday for a decadent taste (notice how the hot chocolate is served – pitcher and small cup of whipped cream) of the talked about signature drink. Absolutely worth the extra calories.~

~I must admit, all the talk about Laduree macaroons made me curious but at the same time skeptical. How good could a sweet treat possibly be to garner the mad attention it has found? Needless to say, after stopping into one of the three Laduree locations in Paris and trying the vanilla macaroon, I now know why they are raved about. AMAZING. Truly. Even though the other macaroons I had at Angelina’s were delicious, Laduree’s far surpassed them. And since there’s a Laduree’s in the Charles de Gaulle airport, I think I’ll be sure to enjoy a few on the flight home as well. Do make sure you try them. (New York and London also now have a Laduree.)

~For our last evening in Paris, we savored a celebratory dinner at Le Grand Colbert (if you loved the Diane Keaton film Something’s Gotta Give as much as I do, you’ll know this restaurant). ~

~On the walk home from Le Grand Colbert, the nearby Lourve pyramid was illuminated and the crowds were much quieter. Deliciously beautiful and a perfect last night in Paris. ~

~One last collage from London. As I shared last week, the Olympic mascots Wenlock and Mandeville were positioned throughout the city of London, and depending up on where they were situated, they each were painted to emulate the area they were placed. Many that we found were in Regent’s Park and the others were along the South Bank across the Thames from Parliament, Westminster Abbey and Big Ben. Tourists, as you can imagine, were continually snapping photos of them, so we played right along and had a “jolly” good time. ~

Images: All images, unless otherwise designated, captured by Simply Luxurious. ~ 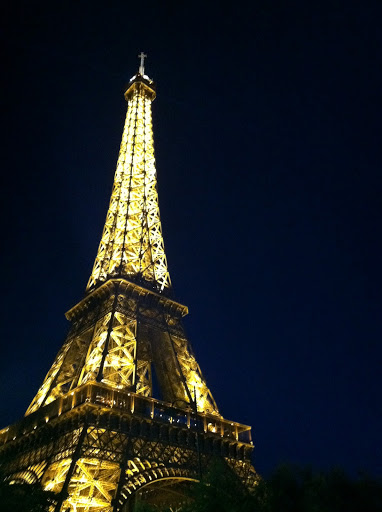