In April 2018, BBC premiered the series The Split. created and written by Abi Morgan (OBE), a Welsh playwright and screenwriter known for her works for television, such as The Hour, and the films The Iron Lady and Suffragette, and it is a series to watch.

Available to be viewed in the states on Sundance streaming, the series has three seasons and 18 episodes, and while fans of the show clamored for more, Morgan knew and had envisioned the show only running for three seasons. In order to tell the storylines, present and resolve the conflicts with each character and meet the objective of the show, to proceed beyond what the show was intended would have diminished the quality, and the quality is quite outstanding.

Nicola Walker stars as Hannah DeFoe. One of the four DeFoe women, Hannah is the lead character in the series, one of the three DeFoe daughters and her mother is the founding partner in the divorce law firm in which two of her daughters (Hannah being one) work.

As the title of the show infers, the series would seem to primarily focus on divorce, and while yes, this is true, in fact, from the first season to the third you are watching the lead couple navigate how to divorce as well as possible as it displays the throes of all the emotions of a long marriage that has run its course while also demonstrating how to find all parties healthily on the other side, what this series also successfully portrays are the splits that occur in our lives with ourselves as we grow, change, and choose different paths.

In each season, there is one main divorce that Hannah is overseeing as a case that has a storyline that runs the entire 6-8 episodes of the season. Then you also have the storylines for each of the DeFoe women and their relationships, as well as current events inspired from real world stories seen through the lens of a divorce law firm and how they handle their clients.

With clear, strong writing that creates and maintains each character consisting throughout the entire duration of the show, viewers witness characters that are as human as each of us – full of emotions, ebbs and flows of strengths and weaknesses, tugs and shoves from culture and family whilst wrestling with what is truly best for ourselves and those we love.

Once I sat down and began watching the series, I could not stop, and in a matter of a week had finished the final episode. While each season is a triumph, the final season, how Morgan chooses to end the series is rewarding and nourishing and uplifting, but also far more real than most series we see here in the states when a show comes to a close on its own terms.

If you are looking for a thoughtful, and yes, stylish series (Walker’s wardrobe is a treat for the eyes as she walks to and from her flat in London to the firm each day) that will remind you life and its answers to the befuddling questions we face endlessly are never black and white, but a myriad of gray and so long as we are gentle with ourselves and remind ourselves that we are human as our those we love, we will figure it out. Below is the trailer for Season 1 (also it does contain some glimpses into the other seasons).

Be sure to listen to my review of the show in the audio version of the episode as I explain in detail why I thoroughly enjoyed it and found it to be a show of substance, thoughtful, careful writing and offering insights for a wide swath of viewers in varying relationship chapters of their lives.

The Split was one of the two Petit Plaisirs for episode #339 of The Simple Sophisticate podcast, The Paradox of True Contentment

~Explore all of TSLL’s Petit Plaisirs here in the Archives. 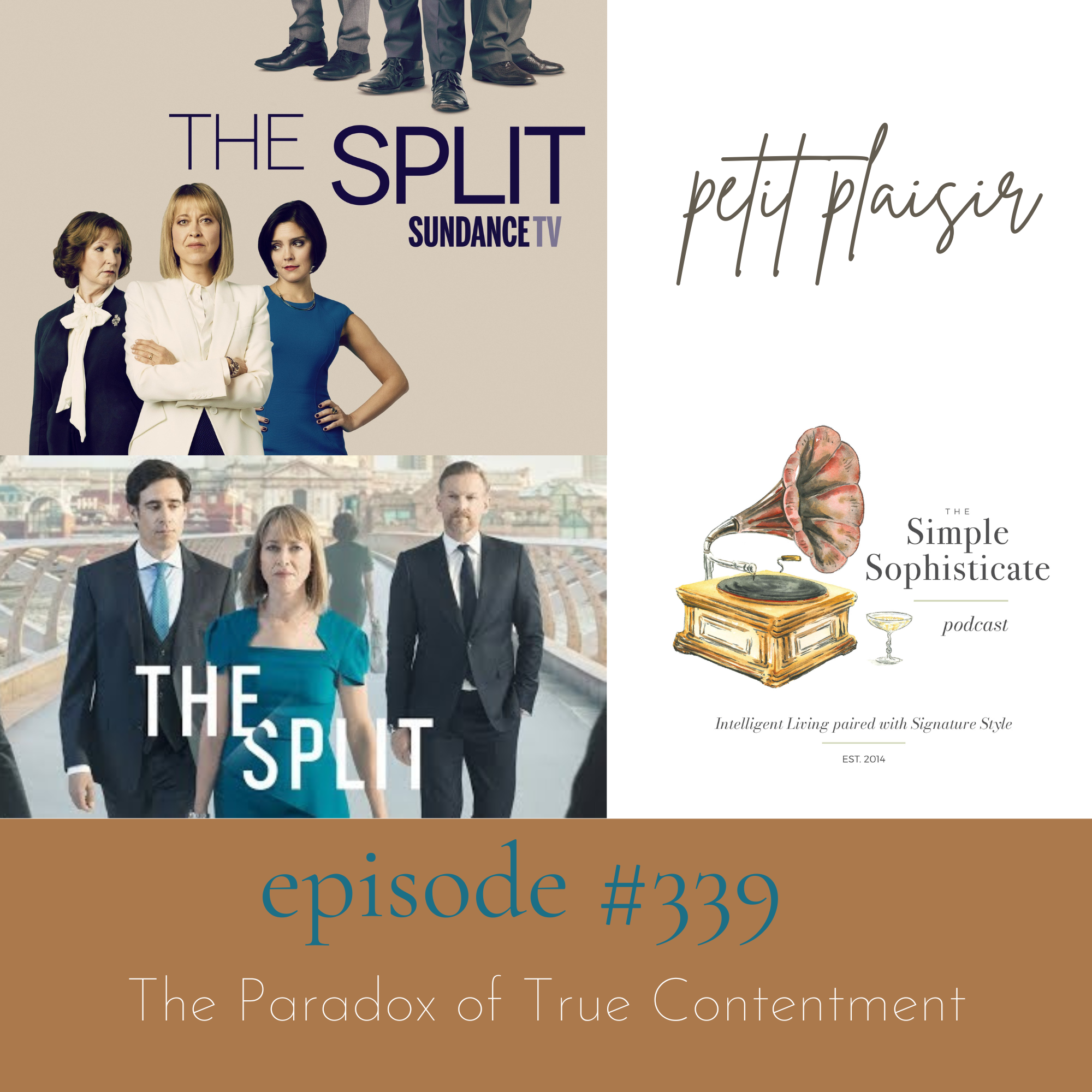