One of the best ways I have found to learn everyday French, conversational French, when I cannot be in France, is to watch French television series and films. Watching a French series is especially helpful because you come to understand the format of each episode, and often they use the same phrases, so you can practice not turning on the subtitles from time to time to see if you can comprehend what is being said.

When I turn on the television, 95% of the time I am watching either a French show or a British show, and I find the majority of my French shows on MHzChoice. MHzChoice is a streaming service you can watch independently on its own platform or through Amazon Prime or AppleTV and it streams all sorts of foreign language films from around the world.

TSLL community comprises of readers from around the globe which makes MHzChoice a streaming service to explore as it doesn’t just offer French series, dramas and comedies; it makes available a vast breadth of international shows, and has them easily organized on their platform. Find shows from Germany, Denmark, Spain, Austria, Armenia, Belgium, Chile, Iceland, Ireland, Norway, Portugal, the list continues.

As this is TSLL’s French Week (the 7th Annual), I wanted to share with you the shows I have streamed and enjoyed on the platform over the past few years. There are already many more I have recently added to my watchlist, so rest assured, when I find more I love, I will be recommending them on the weekly Friday post, This & That.

Probably my favorite series on this list, but that is hard to say because I genuinely enjoyed each one. The reason this series is at the top of my list is because of the art component. Each episode takes you into the actual museum either in Paris (most often) or a beautiful chateau in the Loire Valley or someone’s private home with art that fixates my eyes, and the academic prowess and signature flair of Florence and the courage and savvy of Captain Verlay create a wonderful pair to watch as they solve each mystery.

If serious mysteries are not your thing, Agatha Christie’s Criminal Games is a series to watch. Full of subtle hilarity, and each episode adapted from an original murder mystery written by Agatha Christie, I watched this series during part of the lockdown in 2020 and wish there were more episodes. Set in the 1950s, the style of this time period along with being set in France is a lot of fun to watch, and the cast remains the same throughout.

In my new book – The Road to Le Papillon, I included this series as a Petit Plaisir because it was and is one of my favorite French series. Alas, no more seasons will be made, so savor each one. Each episode takes you out into France’s wine country, so you travel all over the Gallic wonderland, solving murders as you go. The lead of the series is Benjamin Lebel, an internationally renowned wine expert, and alongside is his staff who are just as engaging as he is to watch. Lebel’s girlfriend/partner appears in many of the episodes as well, France, and I absolutely enjoy her as well.

While a drama series for murder and sleuthing, Captain Marleau plays the role of savvy detective with a quirky personality which tends to soften the serious just enough. It looks like this series will continue to have new seasons, so enjoy getting started and look for more to come.

There is only one season, but it is a long one, with 18 episodes, and the cast rotates, so you won’t have the same pair of detectives in each episode. However, you will have them repeat in a couple of episodes (usually two each) which is fun because each pair is enjoyable in their own way, and each detective in the pair is completely opposite from the other in one way or another.

This series is a bit different and approaches the story-telling by telling you how the perfect murder was completed up front, then it is up to the detectives to figure out who was so stealthy, or nearly so, in their planning. I enjoyed this one and wish there were more.

Currently, the sixth season of Cherif has just begun being released on MHzChoice (2 episodes each Tuesday), and while it took me a while to find this series, I have enjoyed it. Adeline (seen in the pic with the character Cherif below) leaves the show mid-5th season, and I genuinely enjoyed her character, but how they transitioned her out and ushered the new female lead in was very well done, and everyone lives. ☺️ I am curious to see how the series moves forward with the new lead, but so far, it is going well. The supporting cast is enjoyable as they provide the levity as the crimes are the drama.

This series is set in Lyon, and Detective Kader Cherif is a well-respected long-serving member of the police force and happens to live just across the street from the station which adds to many of the storylines an interesting detail. The character Cherif also is an aficionado of just about every American crime tv series and will often draw ideas for solving crimes from a particular episode, sharing it with his partner. This adds an odd but quirky touch, and after a while, I began to enjoy it.

Another series that won’t be continuing that I wish would, Detectives. A leading detective agency set in Paris, the crimes are not all murders, and each plot includes a deepening of the main characters. If you have watched Murder in Paradise, you will recognize the female lead. I enjoyed this series very much and watched each episode all too quickly.

Capitain Magellan is a leading detective in the fictional French town of Saignac (you will recognize the area to be SW France), but along with solving a murder in each episode with his light-hearted, yet professional approach, he is also raising two daughters (he is divorced). His daughters are quite lovely, and while the actors who play them change after the first season, they remain the same with Season 2 on through. Magellan’s partner (work) is the one who will physically chase down the culprit, never Magellan, although he is always available with the vehicle to finish the arrest which usually gives him a smile and his partner whilst shaking her head, smiling as well. Also, his girlfriend/partner is a journalist for the local newspaper which has them teaming up more frequently as the series continues. Her character is also a wonderful member of the cast that I highly appreciate as she brings intelligence, strength and an equal give-and-take relationship that is loving.

Many years ago, a TSLL reader recommended this series to me, and once I realized the format of the series, I really began to enjoy it. This series continues to film episodes, and in each one, find yourself in a different part of France. Murder in Alsace, Murder in the Luberon, Murder In [insert French city or region]. You get the idea. Therefore, the detectives are different in each one as well, which means the storyline can change and feel refreshed. A love component is a subplot in each of the episodes involving at least one of the lead detectives if not both. Needless to say, watch this series and escape to the Alps of France, wine country of France, chateau country, and all the while, a murder will be solved and a renewed believe in love as well.

There is no ranking with my list today, because I absolutely love this series, Tandem. The premise is that the two leads have been divorced for ten years, have two teenage kids, and now are working together. She is his boss, both are detectives. Set in Montpellier police investigators Léa Soler and Paul Marchal create constant romantic tension throughout each episode, but their steadiness in their work and their dedication to their children runs through each episode just as strongly. The fourth season was just released this summer, and I do think there will be a fifth.

I saved this new series for the last because I just began watching it. In fact, I have only watched one episode, but I am already looking forward to watching more. And if it is what I think it may be, it will most definitely be a future Petit Plaisir shared during season 9 of The Simple Sophisticate. Set in the 1960s in Paris, Charles de Gaulle is the President of France, and it takes a feminist approach to politics, lifestyle and mores of this time. MHzChoice describes it as Agatha Christie meets Mad Men, as “TV announcer Christine Beauval crashes the glass ceiling and brings criminals to justice”. I think this first season will be devoured tout de suite.

Explore these series and so much more on MHzChoice now, and below, find more information on 6 Cozy French Mysteries I Have Enjoyed (some are included in the list above). 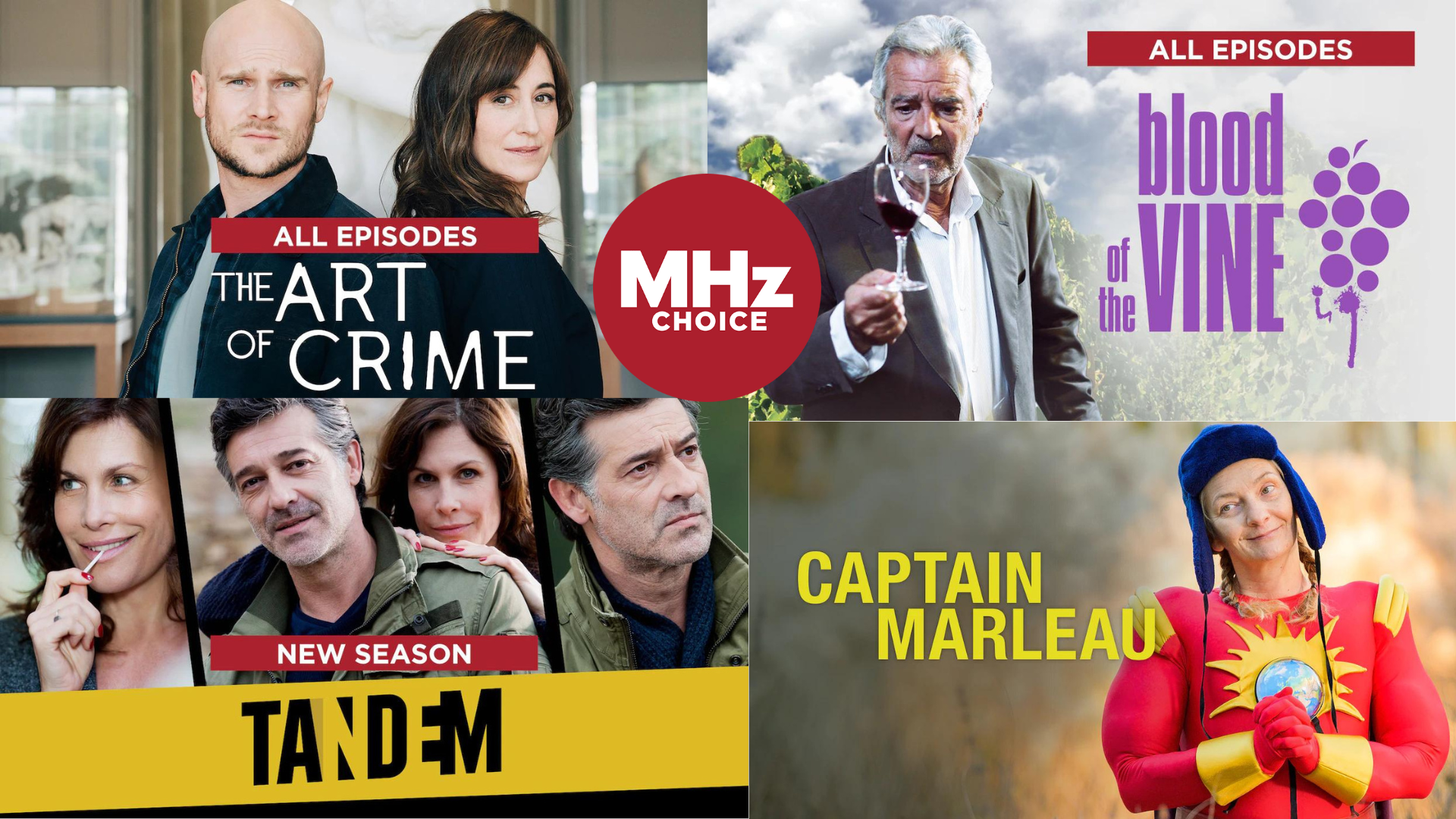 21 thoughts on “Why I Watch MHzChoice, A Streaming Platform for Foreign Shows: My 11 Favorite French Series”