“All music is created with the same sonic DNA, the same tonal building blocks, those miraculous vibrations of air that can be shaped in myriad ways to become a Bach cantata here, a Beyoncé chart-topper there.”

Classical music was for some time a bit of an enigma to me. As a child, my mom’s piano playing would fill the house from time to time as her fingers danced across the ivories, but in my attempts, I was lucky to consistently maintain any harmony.

Beyond the instrument of a piano, I didn’t listen to music beyond what was on the radio, and my first cassette tape (yes, the eighties) was Madonna’s first album eponymously titled. However, when I watched the film The Man from Snowy River in the late eighties, it was the soundtrack that captured my attention (which is saying a lot for the music because I was a fan of Jim Craig’s mountainous horseback rides chasing the Brumbies). And in subsequent films, I found myself gravitating to the classical music soundtrack that often accompanied the storyline. I didn’t necessarily know what it was that was capturing my attention, but it did.

However, it would take some time for me to “dare” to explore what seemed to be a space for those-who-were-in-the-know, and I was certainly not one of those people. Maybe I could find the middle C on the piano, but that was not going to convince anybody I knew the difference between Bach and Mozart, let alone the difference between an orchestra and a symphony.

As my teaching career progressed, I had the opportunity to get to know more and more students who played a musical instrument, and all of them well as they were regularly traveling, performing and demonstrating their ability to juggle both a full academic schedule along with a rigorous music practice schedule. From the violin to the bass, to the saxophone and the trumpet, the students would mention they were playing in the regional symphony, and I would consider attending, even though, I will admit, I was intimidated as I didn’t know what I would be listening to. Silly now of course, but in hindsight, it was true.

Finally, when I moved to Bend, where the community also has their own Central Oregon Symphony, I began attending the seasonal performances. And coincidentially enough, I met one of the cellists as she was a fellow classmate in the French language class I enrolled in at the local community college. She happened to be a professor of Russian at the college and her husband just so happened to be the conductor of the Central Oregon Symphony. Needless to say, I was inspired by her, and sitting in the classroom with her also in an unexpected way humanized her as I had put these talented musicians on a pedestal. She rightly deserves to be on a pedestal as she is awesomely talented, speaks three languages (maybe more) and plays the cello (now this is from a layman’s understanding) brilliantly. But again, it was me who was putting classical music in the space of superiority and untouchable even just to listen to it.

Some of my students that I teach now in Bend also play with the Central Oregon Symphony, and so I go and see them playing right along with other musicians of all different ages, all of them brilliantly talented at their craft. Gradually, I began to understand the different between an orchestra and a symphony because I finally garnered up the courage to ask my students, and they spoke about it as they would the weather, without pomp, just matter-of-factly, and that also helped me to continue to seek out more and more information because I quietly had always been drawn to that music that is labeled classical.

But the truth be told, there are so many different types of classical music, and as I am exploring and learning, I am discovering what I most enjoy at different parts of my day. Admittedly, I am the most neophyte of neophytes when it comes to classical music still, but now I revel in the learning unabashedly.

“There exists this vague cultural awareness that we ‘should’ listen to [classical music] because it will somehow make us more intelligent, more refined, more civilized. This is not helpful. Nor is the cause of classical music served by those who assume that it is ‘superior’ to other types of music—which is just plain wrong—or those who, deep down, believe it must remain the preserve of people with certain backgrounds, educations or skin colours — which is opportunity-hoarding at its most lazy and repellent.”

As I shared in episode #197 of the podcast – The Many Benefits to Listening to Classical Music – I began to listen to classical music in earnest in late 2017, and it now is played throughout my day – at home in the mornings when I wake up, at school, during my walks and commutes, and as I wind down at the end of the day with a good book.

“Who, seriously, has the luxury of taking time out each day to listen to music? . . . Perhaps, though, we have never needed it more, this space to think and reflect and connect and just be.”

While I made one initial Luxurious Classical Music playlist which accompanies episode #197, it mainly consists of well-known favorites from different “Top Classical Music” lists. But I couldn’t tell you the context of the song or the history or the composer. This lack of additional information is in large part why I was drawn to Clemency Burton-Hill’s new book Year of Wonder: Classical Music to Enjoy Day by Day.

“Scientific research is increasingly proving that regular acts of ‘self-care’ (stay with me!) can have untold benefits on our mental health and spiritual well-being: and while personally I’ve never been able to get the hang of, say, regular meditation or yoga, I hear others extol the virtues of these daily rituals and I realize they echo my belief about the way music can work on us. How it can act as a powerful mental tonic that can inexplicably but undeniably set you on the path to a better day or night. How a daily dose of such music can be a form of sonic soul maintenance.”

To come to find out the history of why Aaron Copeland’s song “The Fanfare for the Common Man” was composed in 1942 to boost patriotic morale and reflect the American war effort and that it was actually inspired by Vice President Henry Wallace’s speech (listen to the song and you will most likely immediately recognize it), or that many of Felix Mendelssohn’s compositions were actually written by his sister Franny, and since the attribution was simply F. Mendelssohn, Felix gladly took credit.

“Classical composers are no different from other writers of music, or any creative artist: all they are doing, in their own way, is seeking to get down on paper something they think and feel —which in turn makes others think and feel. It’s an exercise in human connection — and generosity — that might seem complex on the page when you look at all those black notes, but comes down to something exquisitely simple.”

The author Clemency Burton-Hill is an award-winning violinist. Many of my British readers may recognize as she is on a BBC Radio 3’s show Breakfast and has hosted many more. Making her home in London, her passion and sincere love for classical music will bound off the page when you read her introduction, which I highly encourage you to do. I have pulled a few quotes from the introduction and sprinkled them about this post to give you insight into what she hopes readers will find when they read the book, but also why the book was compiled.

“My objective is to empower you to know that this music, so often kept behind seemingly insuperable barriers by those who wish to protect it for the exclusive pleasure of a tiny minority, is yours to engage with and respond to on your own terms — just as you would any other genre.”

As a talented musician and radio host, she regularly would receive requests from friends, acquaintences and even the guy at the local coffee shop asking her to make them a playlist as they would confess they had no idea where to start.

Year of Wonder is where to start to compile your very own classical music playlist. I am currently reading one page a night, listening to the song and deciding if it is something that I enjoy. Granted this may change in the future, but what does my ear like at this moment, I ask? If I am drawn to it, I add it to my “Year of Wonder” playlist (you can check it out if you want to see what I’ve chosen as I go along and enjoy or pick and choose to make your own Year of Wonder playlist).

“A hand-curated treasury of music that I dearly love and which I hope will enhance your daily life as it has mine.”

Burton-Hill introduces you to a wide-ranging cast of composers dating back seven to eight centuries ago, including men and women. You will discover how or why a composition was created, how the audience at the time responded to it, and so many other lovely details that you may not have realized. When I read about Georg Philip Telemann and how critics generally dismissed his work as it seemed “too effortless, too plentiful” and went on to read that he was a friend and contemporary of J.S. Bach, I was most curious to listen to the song Burton-Hill shares – Trumpet Concerto in D Major. And as you will discover, critics can indeed be terribly, terribly wrong. It is seemingly effortless, but that is the exhibition of brilliant talent. And oh, aren’t we lucky to be able to enjoy it?

“And I hope you won’t feel obliged, just because it’s ‘classical music’, to listen in some sort of overly reverent setting: lights down, hushed silence, wearing your Sunday best. By all means create your own active listening ritual if you find that enhances your experience of the piece of the day.”

I do love Burton-Hill’s suggestion at the end of her introduction to create a listening ritual that you enjoy. She shares a handful of ideas, but the best idea will be the one that you enjoy and that enables you to simply discover, enjoy and delight with the new music perhaps you too were hesitant to explore for a reason that, like me, was borne out of a false notion that we weren’t welcome. But as with most worthwhile pursuits, follow your curiosity. Follow what piques your mind, and if classical music has in any way captured your attention, look into it a bit more and you may just discover a treasure trove of wonder.

~An extra composition to share, the one Burton-Hill shares on February 14’s date in the book, the one she would take if she had to be on a desert island. It is lovely, it is Concerto for Two Violins in D Minor II: Largo, ma non Tanto by J. S. Bach 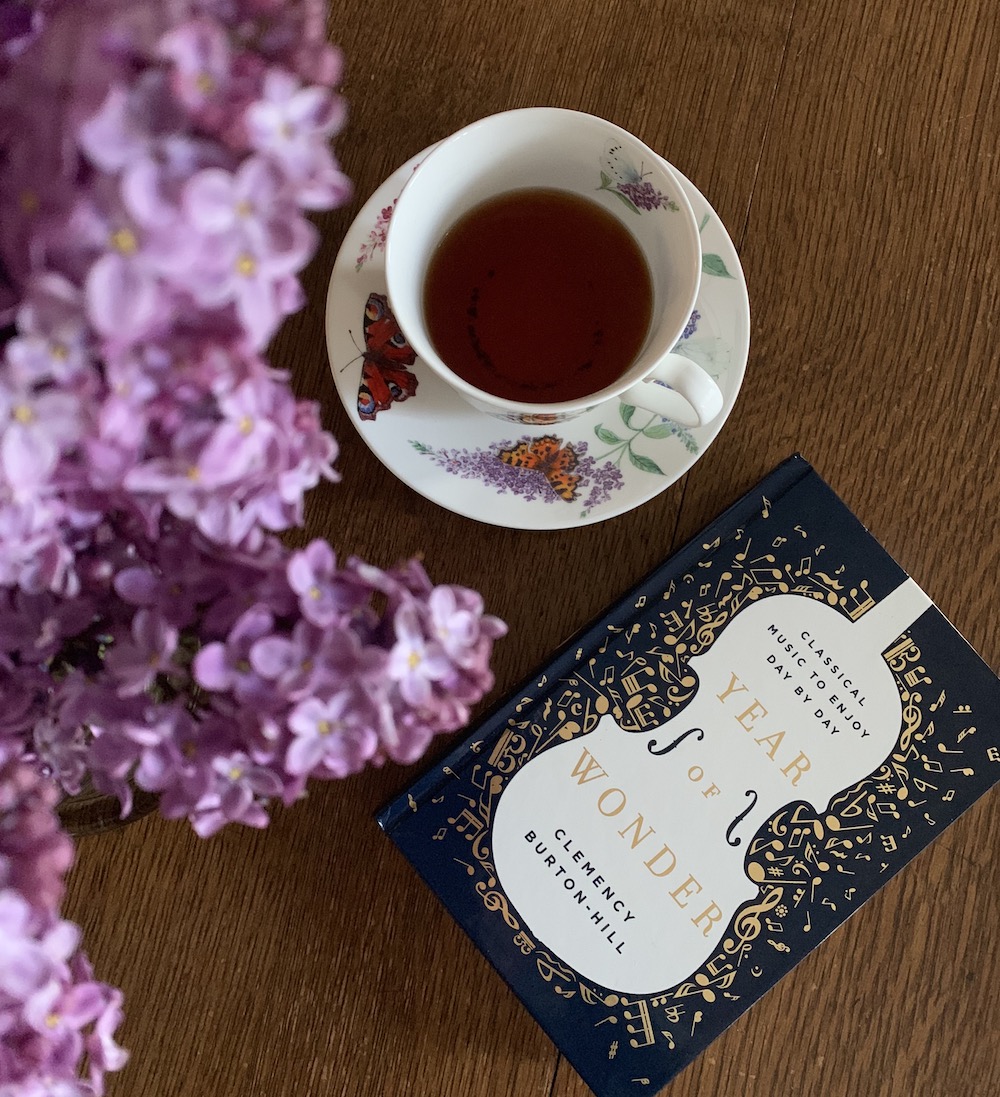 9 thoughts on “A Book That is Delighting Me: Year of Wonder”