“When it comes to living romantically, one shouldn’t follow a road map either – it’s something you should discover through contemplation and intuition.” – Winston Churchill

Ah, to be a romantic. The simple, urban definition is someone who believes in the impossible, sees life through rose-colored glasses, thus loses themselves in hope and falls prey to a reality that does not embody these same ideals.
The part of being a romantic I want to grab onto and dive deeper into is the idea of thinking outside the box, of not being limited by the boundaries that are instituted by society or even by our own experiences. And as such, I want us to gravitate to a higher, more historically accurate definition of the term romantic – the Romantic:  “a life philosophy that prizes the rejection of pure rationalism in favor of intuition, imagination, and emotion; the embrace of nonconformity and sincerity; a tendency towards nostalgia; and the celebration of curiosity, spontaneity, and wonder”.
The Romantic Period is loosely attributed to have come to be in the late 18th century and wrapped up in the mid 19th century. Beginning with the French Revolution and running up through the Civil War, Romantics valued intuition and feelings over rationalism and began to step away from the Industrial Revolution and Enlightenment periods. Why? As they saw it, to improve the quality of life for the individual and return to nature, in other words authenticity. The Transcendentalist movement as well coincided with the Romantic Period with the likes of Henry David Thoreau and Ralph Waldo Emerson who wished to value nature and simplicity over the city life and organized religion that was believed stifled and limited one’s creativity and ability to be true to their innate selves.
In other words, in order for us each to discover our full potential, to curate the life that dances with our predilections and curiosities, we must be willing to look outside the confines that may be limiting what we can do. By choosing to embody the premise of being a Romantic, we are choosing to welcome infinite possibilities as to how our lives can unfold. We are choosing to be the curators of our own lives and not be led around by the nose.
Is being a Romantic easy? No, absolutely not. It takes a strong individual, a strong heart and courageous mind to seek what hasn’t been proven, to do what may have never been done, at least not in your circle of peers, but the gift of a Romantic is that upon harnessing one’s courage, we unleash a world of amazing possibilities to occur in our lives.
Today, I’m going to share six realities that can occur when you choose to tap into your Romantic self. Yes, it already resides inside of you, I am confident in that. Why? If you’ve ever had hope that something would work out against all odds that it most likely wouldn’t, you have inside you an innate Romantic tendency. Whether this was instilled by the books you’ve read, the films you’ve seen or your very own imagination, you have within you a Romantic spirit that is waiting to be acknowledged and granted permission to come alive.
~The theme of TSLL in 2015 – Back to Simple (22 Ways to Get Back to Simple Living).
Let’s get started.

“The human story does not always unfold like an arithmetical calculation on the principle that two and two make four. Sometimes in life they make five, or minus three, and sometimes the blackboard topples down in the middle of the sum and leaves the class in disorder and the pedagogue with a black eye. The element of the unexpected and the unforeseeable is what gives some of its relish to life, and saves us from falling into the mechanic thraldom of the logicians.” -Winston Churchill

Unlike logical, concrete thinkers, a Romantic realizes that often the answers to life are not black or white. Rather there is a lot of gray which means there are a million options for how one’s life journey can unfold. Understanding this reality is perhaps initially unsettling, but when studied further, a reason to sigh a breath of relief. Why?

If you only accept there are two answers to how any event will turn out in your life – black or white – then if the outcome you wish to happen doesn’t work, you’re devastated.  But if you know that shades of gray exist, that you will be able to attend the school you want just maybe not when you had planned or he is interested, but wasn’t able to respond promptly when you texted because his phone’s battery was dead, then you have reason to remain hopeful.
The only reason black and white came to be accepted as the norm is because it is a simple way of explaining life, but who said life and how it proceeds and unfolds was ever simple?

If you are indeed a Romantic, similar to Winston Churchill, you are grounded in the realities of now and what has happened in the past. Also, you are logical just enough to have common sense, knowing how to navigate the realities of today’s world – money must be in your account in order to withdraw it, speed limits must be obeyed, taxes must be paid, etc. However, you also pay attention, deeply so, to your intuition.
Take for example the stock market, if you are a savvy, in the know investor, you know that a capitalist economy ebbs and rises, and as such, when it ebbs and you have money, you know this is a savvy time to invest in the right venture. Logically, such a decision may not make sense on the surface, but due to a historical understanding of the market, a proper education of economics, this could lead to a very successful financial portfolio over the long haul.
In other words, knowing the history, the whys and hows, being properly informed and educated is crucial as you will then know which risks to take and which to ignore. And when you can trust your intuition to help you make a decision, you can avoid much unnecessary heartbreak.

As a Romantic, you are not ignoring what has come before. Quite the opposite. A Romantic is acknowledging the past and insisting it can be done better and bravely moves forward even when their our doubters, perhaps a crowd of doubters. Jane Austen boldly and successfully penned six novels that while adhering in many respects to the social norms of propriety, allowed her protagonists to defy triumphantly what was expected of them in order to achieve a most fulfilling personal life.
In other words, to be a Romantic you must know the rules before you can break them. You must have a reason for breaking them, an explanation of why they can no longer be an effective means to the goal they were initially meant to reach. To simply break a rule because it exists is by definition an immature and childish act. To break a rule that no longer serves its purpose is progress.

4. Design the Life of Your Dreams

A Romantic envisions what hasn’t been done and believes they can do it. A Romantic isn’t limited by the possibilities that exist and rather chooses to explore and experiment with life. And in so doing often experiences moments, people and feelings that no one ever before would have been able to explain to them.
As an adult you have the ability to acquire the independence, are given the freedom by law and the power should you choose to use it, to cultivate the life of your dreams. Now get busy doing just that. The best life you desire is possible if you have the courage to seek it.

A Romantic doesn’t accept that life as one grows older must be a certain way. Rather a Romantic is constantly questioning, exploring, in other words they are perpetually curious. And if one is perpetually curious, as I’ve spoke about in previous posts, we are constantly learning something. And if we are constantly learning, our mind is being exercised and thus staving off dementia and more importantly defying that life can ever be boring.
After all, to watch a baby explore and discover new anything is to see their face light up with wonder and sincere excitement which then provokes them to seek more and do more. Doing and exploring is living and living well. To live afraid, to live cautiously is to regress and unnecessarily allows ourselves to fall out of love with life.

A Romantic is someone who dares to step inside themselves, listen and acknowledge what is being said. What calls you, what makes you want to dance? What tickles your curiosities, what causes you to lose all track of time? Why aren’t you pursuing each and every one of these activities?
Yes, society may expect one thing from you, and if that is in alignment with what speaks to you, what pulls at your passionate heart, by all means go forth, but if it doesn’t, you must let go of tradition and dance to your own music. You must step “out of line” and live your life so that you can offer your talents to the world, to those you love and most importantly to yourself so that you can go to bed each night at peace.

The best life you can live must be lived intentionally. It must be lived mindfully aware of why you are doing what you are doing. However, in living mindfully, you are also letting life unfold as it will. No you are not just going along, but once you begin rolling in the direction you desire, it does mean you let go of the wheel so to speak  and see what will happen.

This is scary because we don’t know what life will offer us. And I use the word offer because it is up to us to seize the opportunities when they present themselves. They may not be what we had expected (thus the black vs. white), indeed they most likely will be gray, but so what if they don’t look like we had imagined. Embrace life, explore life and see what magic can occur. You may not be able to predict it, and that may be the greatest gift of all.

~CORRECTION: In the podcast taping, the centuries were misspoken. The Romantic period, as mentioned above, occurred during the late 18th century and through the mid-19th century.

~8 Ways to Be More Courageous

~How to Make Your Own History 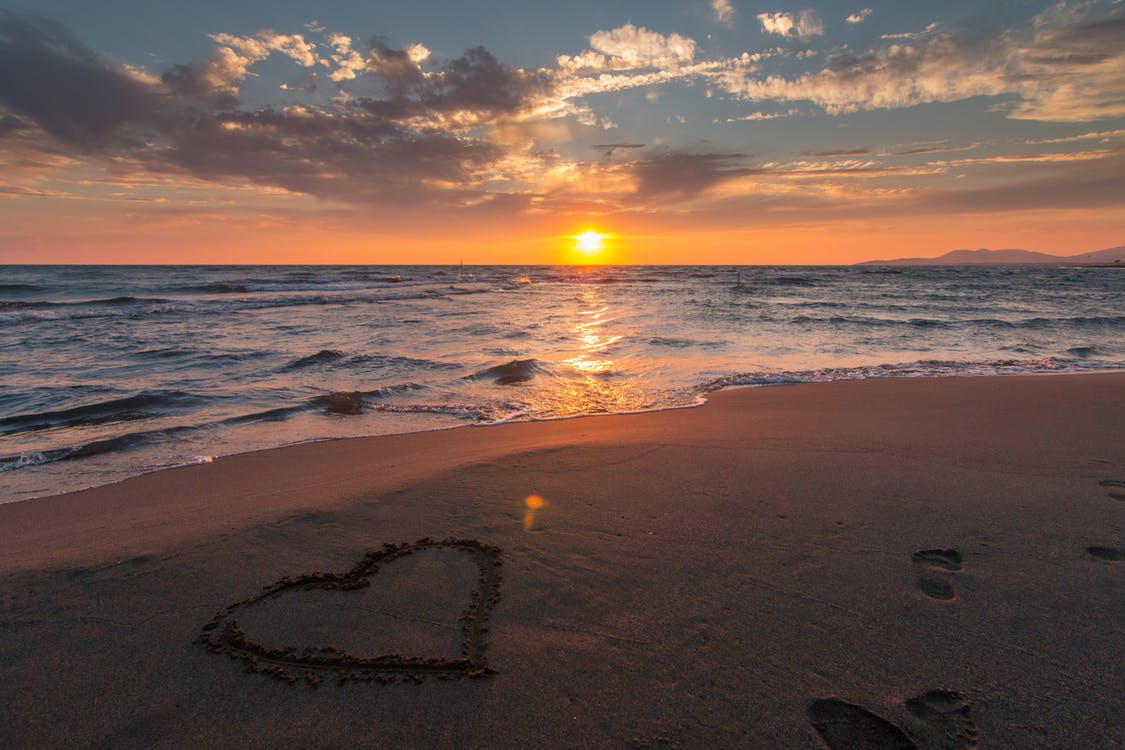