When the word Paris is mentioned, many things jump to mind, including fashion, but if we’re talking food – it’s wine, cheese and bread. So when Paris By Mouth’s “Taste of the Marais” tour began at the Poilâne bakery, I knew it was going to be a great day.

If one talks about bread and Paris in the same breath, Poilâne must be given its just due. Beginning in 1932, Pierre Poilâne ventured from Normandy to the Saint- Germain des Prés district in Paris, determined to bake and sell sourdough rounds rather than the Parisian famed baguettes. Taking some time for Parisians to become interested in the dark flour dough (grey color flour is used), he eventually won them over as, unlike baguettes which must be enjoyed fresh within hours of purchasing, the four pound sourdough rounds can be enjoyed for a handful of days keeping its peak flavor.

Adhering to the recipe of only yeast, flour and water (the sourdough starter that was used in 1932 is still being used today – which is amazing), the business was handed to Pierre’s son Lionel Poilâne in the early seventies which is when the business became even more of a Parisian institution due to his talent with marketing, creativity and close ties with the artist community (Salvador Dali ordered an entire bedroom to be made out of bread!).

Tragically Lionel and his wife died in a helicopter crash in October 2002, and Lionel’s oldest daughter, Apollonia, 18 at the time, was faced with the decision to go to college at Harvard or take over the multi-million dollar family business.

She chose both and ran Poilâne from her dorm room for four years in which time she received her degree and promptly returned to Paris where she continues to run the successful family business. (Read the detailed profile “Bread Winner” by Lauren Collins in the December 2012 issue of The New Yorker to read the entire story behind the name.)

With four locations in Paris and two in London, the signature item, the four pounds sourdough round (also known as a miche) with the symbolic “P” at the center, is sent to more than twenty-five hundred of Paris’s supermarkets and restaurants, the Elysée Palace (where the French President resides in Paris), and two hundred thousand loaves are also shipped to clients in twenty countries each year (source). And if you want your very own loaf, you can have it shipped to your post office for under 40 Euros (shop here).

What I appreciated most is Apollonia Poilâne’s resolution to focus on the philosophy – “Every bread should have a purpose”. The intention for simplicity – you can only buy sourdough rounds, croissants (I had the pleasure of enjoying a chocolate croissant which took my breath away), apple tarts (unique and scrumptious) and a few other bakery staples – (try the Punitions, or punishment cookies) – has proven effective and quite attractive as she focuses on the quality of her product, not over-exposing the name to sacrifice where it all began.

Pair the long slices of a sourdough round with comte cheese, dipped in olive oil, toasted with lush French butter or nibble sans anything. Either way, a simple luxury that won’t disappoint.

Below, in the summer of 2002, months before the loss of Lionel, he taped this video with Dorie Greenspan and showed her how the punishment cookies (petite shortbread cookies – it will be hard to have just one, trust me) and it was aired on CBS Sunday morning (I can vividly remember this video when it originally aired). Enjoy and be sure to stop in to the nearest location the next time you visit Paris.

~the Marais district location at 38 rue Debelleyme where you can enjoy their dining room and chandeliers designed with bread – yes, each of these chandeliers is entirely bread!~ 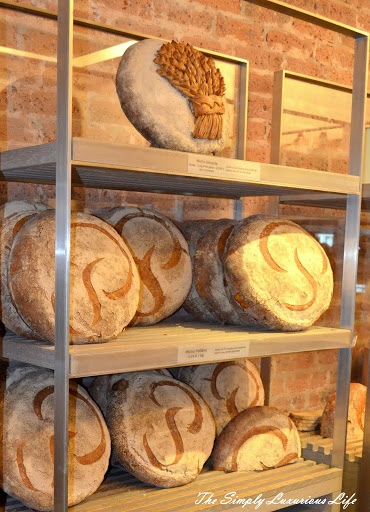 5 thoughts on “Must Visit in Paris: Poilâne”